Turkish rapper, singer, songwriter, rapper and music producer Akaya finds his rhythm with the releases of the bilingual and trilingual versions of his newest single “Belong To Me.”

Inspired by a variety of musical genres including Hip-Hop, Pop, Rap, Electronica, House music, Trap, Reggaeton and R&B, Akaya blends these sounds to create fun, enjoyable music. “Belong To Me” is one of the few releases in teh past few years that shows his versatility as an artist capable of connecting with a wide audience. 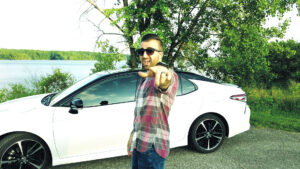 His departure from Turkey to the United States began a influential rise in his musical interests and career that he now pursues full-time while connecting with others in the industry.

“Belong To Me” has a catchy flow with three different languages slowly changing the flow in an engaging way that makes you want to dance along to the beats and his impressive vocals.

Not only can Akaya create a melodic sound that turns heads and keep listeners stuck on his every word, he displays a sincere interest in connecting with listeners from all over the world while appreciating what all kinds of cultures bring. His music is an example of cultures coming together to spread the common love for music throughout the world.

Check out his past releases here and follow him online to find out more about him! “Belong To Me” is now available on all streaming platforms!