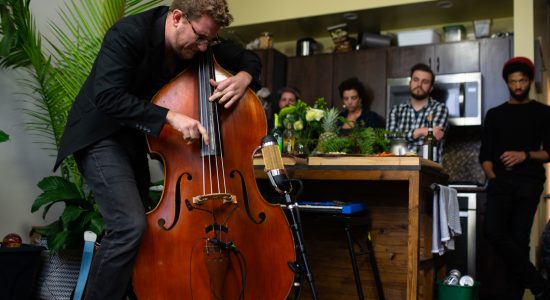 Bassist/Composer/Instrumentalist Andrew Vogt strives in the Chicago music scene with his musical diversity. His newest release “Awakening” is the first single from the upcoming album with the same title.

Andrew Vogt performs in front of a full house at Form Chicago in the video performance, which is an open space for the Chicago community of creatives to together to showcase their skills, services and have the opportunity to network with one another.

“Awakening” displays Vogt performing with Sam Trump & Jeff Swanson in a mystical, soothing range of sounds coming from his bass and accompanying instruments. Listeners will instantly feel relaxed at the sounds of their performance.

Hailing from the Chicago area, Andrew Vogt records and tours extensively with a variety of established local and national acts. His versatility has allowed him to play alongside top legendary artists like Ernie Watts, Donny McCaslin, Natt Watts, Woody Goss, Bonzo Squad and more.

Andrew Vogt is everywhere you look, as he will soon be back to performing throughout the City of Chicago and with three albums currently available, including The AV Club, For Free, and his latest EP Hammerspace. Stay tuned for the release of his upcoming EP, coming later this year!