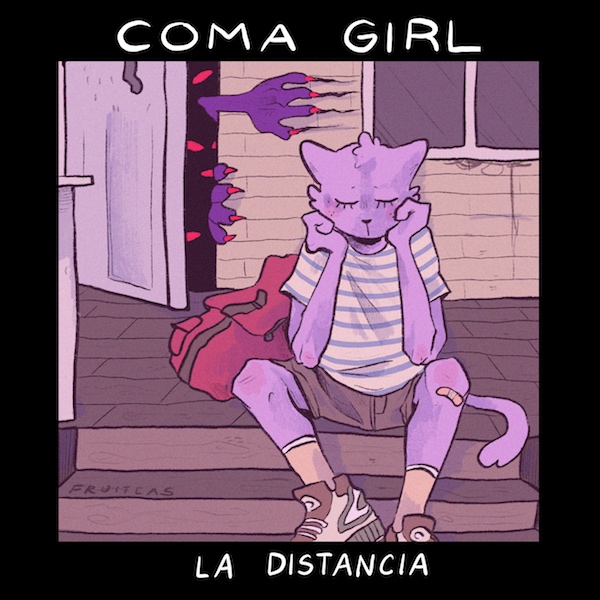 Portland based songwriter and musician Quin Saunders, aka Coma Girl, produces indie/alt. power-pop that crisscrosses genres and comes packed with a punch.

Case in point is Coma Girl’s new single, “La Distancia,” a perfect example of her distinctly original, direct and sassy style and sound.

Heavy basslines and sweet guitars create the background for this inspiring song. “La Distancia” means ‘the distance’ in Spanish, which is a bit ironic for the times but only a coincidence since it was written before the pandemic.

The track is the first of a double drop of new singles from Coma Girl’s debut E.P. that was released on May 15th.

In addition to producing and mixing, Quin writes all of her songs, sings and also plays guitar, bass, and drums. She is the model of a DIY musician and one-woman band.

She prefers to work solo in the studio but on stage she is joined by friends Keagan O’brien on drums and Izabella Weiss on bass.  Currently, plans are on hold for concerts due to the coronavirus.

Quin’s songs are intimate and also direct. Her songwriting process is described as “throwing a shitload of spaghetti on the wall and seeing what sticks. I’m writing lyrics in my phone notes on the daily, probably five percent of them get turned into a song.”

Of that five percent,  Quin continues, “maybe only one-fourth of them stick.  If there’s a lyric, progression, or an entire song that I just can’t ignore or put down, I know there’s really something to it. “

Quin’s dream producers include Joe Reinhart and Will Yip. She would love to open for singer/songwriter Jeff Rosenstock. “I so admire the dude’s mentality and work ethic.”

Her message to listeners and followers when facing tough times is to always know that “someone else feels just like you.”

Coma Girl’s career actually began when she was still a young teen. In fact, she says, it was Green Day’s American Idiot that inspired tens of thousands of young musicians just like her to make music that was a return to the roots –  The Beatles, Nirvana, and Dylan for example.

Quin has previously toured up and down the west coast with her first band Superhighway, performing at venus from Portland’s beautiful Crystal Ballroom to the legendary Independent in San Francisco.

After returning from a stint of shows in Los Angeles last year, the band decided to set up a secret show for fans.

“So we set up this secret show at a bike shop with clues and stuff,” she says. “We had never headlined a show and were nervous if anyone would come. Low and behold they came,” she adds.

“More people showed up than the shop could hold. It was off the chain. People were on one another’s shoulders; holding up signs; underwear on stage… we couldn’t believe it,” she exclaims.

“But the all-time best part was watching a crowd sing along with a song I had written. That was the first time I saw that happen.”

Quin has opened for bands and artists like hellogoodbye, Wild Cub, Bear Hands, Kongos, Kitten, and Aaron Carter while touring with Superhighway.

Her main musical influences are Laura Jane Grace, Robert Smith, and Meek Mill.  “These three people are superheroes in my eyes.”

If there were one thing about the music industry she would change, Quin remarks that she would “take all the nepotism and shove it up each major label’s asshole.”