Born and raised in Cleveland, Ohio, EZ Raxx is known for his addictive mix of Trap, Rap/Hip-Hop And Dancehall music. As the founder of Top $hotta Enterprise, he’s immersed himself 100% into his music and sharing it with the world.

Check out our interview as we dive deep into the music scene in Ohio, his released EP “Thot Season” and that Coronavirus keeping everyone on lock down!

Thank you so much for speaking with Music Trails! Please introduce yourself to our readers

You’ve been on a hiatus since your last EP “Thot Season.” Have you been working on any new music since then?

EZ Raxx: Ha Ha! Yeah I’ve been working on a lot of new music. Honestly I’m tryna put something together for my listeners. So if your an EZ Raxx fan you got a lot coming this year.

EZ Raxx: To be honest those have been in the works for a while. Just cause I want them to be perfect. But expect a lot of visuals y’all. The label just increased my budget this year so.

Which song of yours is your favorite & why?

EZ Raxx: To be real I like all my songs not to sound cocky or nun. But if it was up to me I would pick “Party” cause it definitely is a turnt song that will start some you feel me? That visual gone go crazy fasho.

What influenced you to pursue music?

EZ Raxx: I had grew up with a lot of music influences growing up. My Grand-Father used to play the guitar, my grandparents had singing bible studies. My other Grand-Mother worked in a store/restaurant/club so I spent a lot of time catching the vibes. But when I first touched that mic at 8 years old and recorded myself for the first time I couldn’t picture myself doing anything else.

What’s it like living in Cleveland, Ohio ? Did your hometown influence your decision to begin creating your own music?

EZ Raxx: I mean Cleveland is cool for real it’s a lot of crime but I mean isn’t there a lot of crime everywhere? ???? But my city has some influence on my music. Like don’t get me wrong Cleveland is a gangsta ass city but all Gangstas still be out tryna have fun while they make their money you feel me? Shoutout to Cleveland tho! I love y’all!

Things are really different for us right now. With everything going on in the world, what are your thoughts on the Coronavirus?

EZ Raxx: Well I mean I’m not in quarantine or anything like that

but I mean honestly I think it’s a semi-serious disease. Now before I get backlash let me explain why. I know that they say it kills the elderly, infants, and people with a weak immune system. That’s what makes it serious. But the reason I say semi-serious is because nobody where I’m from is staying inside. Like they either goin to work or they hittin the trap. I don’t know about the other states in quarantine so I’m just speaking for what I see in my city.

Are you currently working on any projects?

EZ Raxx: Well for everyone who keeps asking me if I’m okay cause I keep posting I’m down bad that’s what the new ep I’m working on is called.

Who can we expect to hear on “Down Bad”?

EZ Raxx: For real I just want to touch & be heard by more people for real. I love my fans supporters & haters. Y’all the reason I keep grinding and I won’t ever stop grinding.

Anybody you want to shoutout?

EZ Raxx: Yeah shoutout to my nephews & nieces, my brother & sisters, my mother & father, my nigga Yolaa, my Top Shotta family, my supporters, my haters. Shoutout to Music Trails too. 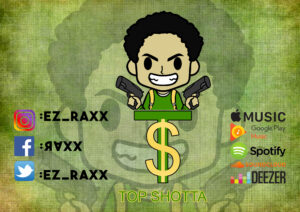