“For The Crew” Presented By NoCap 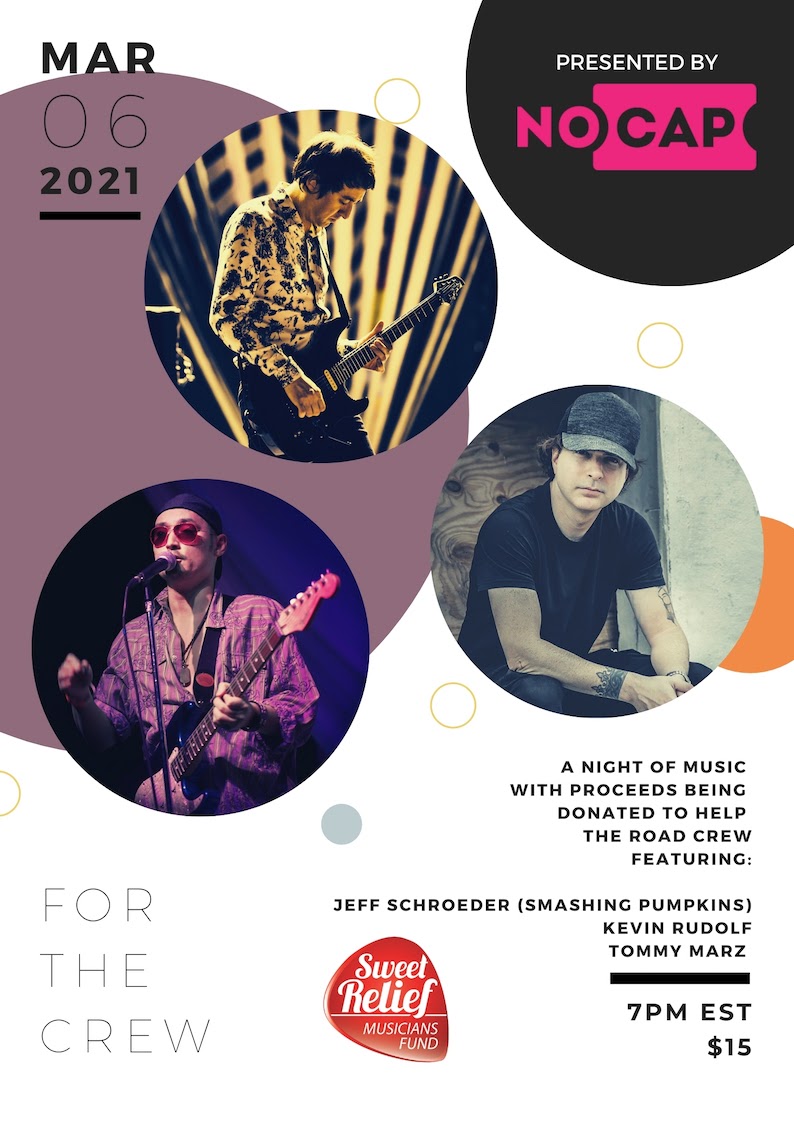 “For The Crew” Presented By NoCap

A STREAMING EVENT WITH PERFORMANCES BY JEFF SCHROEDER OF THE SMASHING PUMPKINS,

PROCEEDS TO SUPPORT MEMBERS OF THE LIVE MUSIC INDUSTRY

NASHVILLE, TN (February 4, 2021) – Set for Saturday, March 6 at 7pm ET, “For The Crew,” presented by NoCap and in collaboration with the Sweet Relief Musicians Fund, will feature performances by Jeff Schroeder of The Smashing Pumpkins, Kevin Rudolf and Tommy Marz. Proceeds from the event will be going directly to support members of the live music industry; the road crew who are the backbone of every show, night-after-night, that have been devastated by the impact of the COVID-19 pandemic.

Tickets are on sale now via the NoCap website here.

“The whole of the music industry has been hit hard by Covid-19,” says Schroeder. “One particular segment of the industry that is often overlooked and/or forgotten is road crews. It’s quite simple: without our crews, there would be no shows. These are the women and men behind the scenes who help bring our music to you. With this online benefit show, our hope is to raise both money and awareness for our crews.”

“With so many people in our business out of work due to Covid, I’m happy there is a little something we can do to raise money and maybe bring a smile,” shares Rudolf.

Marz adds: “During this pandemic, there have been times where many people have felt helpless, myself included. As the opportunity arose to raise money for people whose incomes have been affected by Covid-19, the road crews became a focus of that opportunity. The road crew teams are an important part of the live show experience and have been affected greatly. We are excited and grateful to be partnering with Sweet Relief to try and bring some relief to members of the road crew.”

Fans can expect to watch solo-sets from Schroeder, Rudolf, and Marz.

Jeff Schroeder is a musician living in Los Angeles, CA. Since 2006, Jeff has been a member of  the alternative rock band, The Smashing Pumpkins. In 2019, he launched a new project with L.A. based multi-instrumentalist, Mindy Song, called Night Dreamer, who recently released their debut EP, Treasure.

Before joining The Smashing Pumpkins, Jeff was a member of the Lassie Foundation, a noise pop band from Los Angeles. The Lassie Foundation released three albums and numerous EPs and singles. While never gaining widespread popularity, the band developed a loyal cult following. Very soon, the now defunct band will release remastered versions of their entire catalog.

Rudolf was born and raised in New York City. “There aren’t many of us who survived!” he says jokingly. “A lot of the kids I grew up with, we experienced way too much way too soon. Some OD’ed, some peaked too early, and some just got lost along the way.” At age 11, Rudolf picked up his first guitar. Soon after, playing became an obsession for Rudolf and he started recording, writing, producing, and playing all of the instruments by himself.

Word quickly got out and Madonna signed Rudolf to her Maverick Records imprint only to be dropped from the label soon after. So Rudolf hid out in Miami, working with legendary producer Timbaland, playing guitar on records from Black Eyed Peas to Nelly Furtado and Justin Timberlake. It was on those late balmy nights, with Bentleys in the parking lot of the Hit Factory, diamonds, and the excess of hip-hop in the mid-2000’s that formed the landscape for his next vision; Rudolf’s first solo album, In The City.

It was also in Miami where Rudolf met Ronald “Slim” Williams and Bryan “Baby” Williams, the brothers who founded Cash Money Records. It was Slim who understood Rudolf’s vision and they struck a deal one late night in the parking lot of The Hit Factory. Rudolf became the first non hip-hop artist on the Cash Money label.

The album’s seminal first single, “Let it Rock,” which featured rapper Lil Wayne was released in June 2008 and immediately exploded. The song became a Top 5 Single around the world, going on to sell over 5 million singles and arguably become one of the most definitive songs of that year. Another album To The Sky followed and so did the hits, including the gold certified “Welcome to the World,” and, once again teaming up with Lil Wayne, the platinum single, “I Made It.” After two years on the road Rudolf found himself in Los Angeles as a suddenly, very in demand producer and songwriter. As such, he crafted songs for Cobra Starship, FloRida, Selena Gomez, Gavin Degraw, and Leona Lewis.

Tommy Marz first began his solo career in 2011 with a cover of George Michael’s “Faith” that took off after Michael tweeted the video to his followers. Tommy has gone on to see his music placed on various television networks including NBC and MTV.  He also released a version of Puddle Of Mudd’s hit song “Blurry” in 2019 that features legendary 90s hip-hop/pop group P.M. Dawn.

The multi-faceted artist, who’s been performing in bands since 2004, also fronted the eponymous Tommy Marz Band between 2012-2018. The alt-rock trio released two albums (Bringing Alpha [2015] and Seventy-One Trips Around The Sun [2018]), which both charted on the iTunes Top 30 Rock Chart, toured alongside artists such as Fuel, Scott Stapp, The Dan Band, Great White and Scott Weiland. Tommy released Chasing Light on September 23, 2020. The EP reached #17 on the iTunes singer-songwriter chart.

Sweet Relief Musicians Fund provides financial assistance to all types of career musicians and music industry workers who are struggling to make ends meet while facing illness, disability, or age-related problems. In other words, Healing Musicians in Need. We all have received so much out of music, it’s time to give a little back!

A company founded by artists and venue owners trying to create an opportunity for more fans to experience live shows. We have found a way for those who can’t make it to the show to never miss out on their favorite artists performances and also benefit the amazing artists and venues that put on those shows. The new general admission.