Have you ever been blocked by your ex on social media and not known what to do?!

Electro-Pop and LGBTQ+ emerging artist Henry Dell decided to turn that relatable experience into a new single that’s bound to hook listeners in after the first listen. He teams up with up and coming dance-pop producer YCONN to deliver an infectious dance-pop record perfect for these dreadful times when we may feel unsure of what to do. Together, they say “let’s just dance it out!”

The duo create an intriguing music video along with the single creating an interesting take on their first collaboration together. The music video for “Blocked Me” includes colorful kaleidoscopic visuals with British actor Matt Lucas as the eye candy they’re trying to make theirs. As the “social media” character in the story, he comically makes a run for it with an interesting backdrop of video-game-inspired effects.

YCONN is known for his addictive pop-style creations, which he has lent a helping hand to artists including SONDR, PBH & Jack, Dualities, Call Me Loop and many more. Here, his knack for original, danceable pop with a slightly-dark edge merges into accurately creating the visions of the pitfalls of love and social media.

The well-crafted release is the type of single you want to share when you get blocked online. Let the moment and let loose with the pop-retro rhythms of “Blocked Me.” 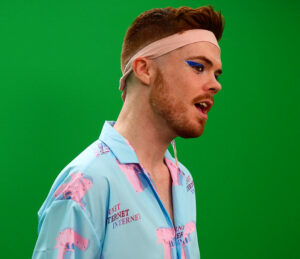