Interview: Akaya Speaks About “Belong To Me” & Musical Influence Found In The US

We previously shared the enticing new single “Belong To Me” from Akaya and now we’re speaking with him to bring in more details about the release! Check out the interview down below:

Thank you for joining us! Who Is Akaya and can you tell us little bit about yourself?

Akaya is a Turkish rapper, singer, songwriter, producer who lives in the United States, whose music blends with Hip-Hop, Pop, Rap, Trap and Reggaeton.

What inspired you to start releasing your own music?

My Father is a Turkish Folk Music Singer so I grew up listening my father and lots of music on TV channels and on radio. I started practicing Turkish Folk Music and learned how to play baglama from my father. In my teenage years I started listening to Hip-Hop, R&B, Dance, and Reggaeton music and decided to release my own style of music.

Your debut single “Belong To Me” has two different versions. What was the process of creating the songs like?

It was not hard at all because I educated myself on creating my own craft and style. After years of making music and learning at the same time I decided I should add lyrics of my own native language as well so people can respect me back in my country and I can represent the musical roots from where I am from originally on a global level. I wanted to release two versions – the trilingual version is for my Turkish listeners and the bilingual one is for global listeners.

How do you hope listeners feel when they listen to these songs?

I want listeners to feel good when they listen my music. I want people to dance, feel happy, energetic and be in a good mood to have fun at all times.

Which version do you like sharing with new listeners first and why?

I like sharing the trilingual version so people back in Turkey could see that there is a Turkish guy overseas that’s trying to represent his roots globally through his music.

I am a software/website developer.

I started adding middle eastern adlibs, violins, shouts, etc. People will be listening to those in my new tracks.

I also love experimenting because I listen to hours of music a day. I listen to a lot of albums on Spotify from all over the world and the more I listen, the more I get inspired and experiment new things in my productions.

My goals for rest of 2020 is to release a new single per month and keep on creating music to add my portfolio. 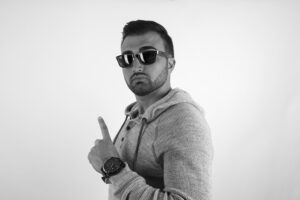