BLACK HESHER releases his grunge hop psychedelic lo fi magnum opus Saints and Sirens. From the first listen, it’s evident BLACK HESHER is very open about his raw, emotional feelings and doesn’t hide it away. Listen to Saints and Sirens and check out our interview where we break down the album and its creation.

Congratulations on your new album! What would you tell new listeners about it?

BH: Thank you. The album was inspired by the album cover painted by the amazing and super talented Kate Krysinski. The artwork fueled a lot of the ideas for the songs. The album itself is like a lo-fi psychedelic grunge hop sonic rollercoaster ride through my brain.

Your newest album, Saints and Sirens, is finally available for streaming! Which song is the most meaningful one for you and why?

BH: It’s really hard to say each song has its own meaning to me for different reasons and hopefully people who listen to it will have their own meanings for the songs as well.

There are tons of collaborations in the album. “Old Film (ft. Natalie Dime)” reflects on figuring out where old souls fit in while her vocals give the track a gentle vibe. How did this collaboration come together?

BH: Natalie Dime is an incredible artist in her own right. We met some time ago and have been waiting for just the right song to collaborate on. The stars sort of lined up and we got the chance to create a song with many different layers and meaning to the both of us.

The album has 22 songs!! What was inspiring you to continue writing and forming this album into one?

BH: I don’t know really know. Just like most of my albums, they kind of form themselves. The songs take shape and it develops from there. Once the album is done, It’s like a moment of my life captured in time.

“Late Night (ft. J Andrew)” is a highlight track for us. How do you come up with this song’s sound and songwriting?

BH: It started as a psychedelic hip hop/alt rock track. I was trying to go for a song that sounded like a dream inside a dream, inside another dream. The lyrics were random and free association but once they were recorded I realized they actually created a narrative. I work with J. Andrew all the time on music. We are labelmates on Cult Muzic together. He came in and wrote the chorus, added his vocals and guitar. He added the perfect touch of magic to take the song to the next level and through the cosmos.

In what ways were you able to find inspiration when creating this album?

BH: My inspiration came from the album cover artwork and from falling in love with hip hop all over again. Falling in love with a girl. Having my heartbroken. It came from my head being full of weird pop culture references and my need to rhyme them over strange beats lol. My road from depression to happiness. My inspiration came from knowing the universe is an amazing place and full of potential. Mainly my inspiration comes from my circle of friends who are all amazing artists or musicians. They truly inspire me.

With a wide mix of grunge hop psychedelic lo-fi sounds found all over the album, how would you describe your sound to someone who just discovers Saints and Sirens?

BH: Psychedelic Grunge Hop…….you pretty much summed it up. 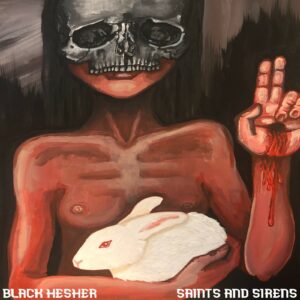 What is your creative process when producing new music?

BH: It’s different every time.Mostly I swim in the ocean of thoughts in my mind in a psychedelic submarine them come out with music.

BH: Justin Warfield definitely, The Dust Brothers, Beastie Boys, Pixes, Beach Boys, Prince Paul so so many it depends on the day and mood really.

The album was released through Cult Muzic Media. How did you first start working with them as an independent artist?

BH: Its an Indie Label I had a had in founding with like-minded Artists to release music and other things
like films and books.

With a new album out, what’s next for you?

BH: Since we can’t tour or play live shows due to the current state of the world. I’ll be running the business end of Cult Muzic Media, doing more videos /visuals for the album, maybe live stream some performances, and I’m going to be putting out my first book.

BH: Thank you for talking with me, I really appreciate it. I would say to anyone remember to always follow your dreams. No matter what