With an artist name like Comiendo Piedras (Stone Eating), it’s very difficult to forget seeing his original songs and covers on Youtube. Referring to putting yourself difficult situations, Comiendo Piedras is all about getting those experiences to come out stronger in the end.

Read our interview on how Youtube has played a significant part in his life and music career, his music, and what’s next for this young artist!

Your very unique stage name is a great reminder to place ourselves in difficult situations. Do you remember the moment you decided to stick with “Comiendo Piedras” (Stone Eating) as your stage name?

It’s a funny story because I never heard that expression before. I heard it for the first time back in 2015 while I was listening to a radio show. There, an old man was ranting about how difficult was for him to gain a little fame back in his times, while the “millenial kids” only have to record themselves “eating stones” and upload it to youtube, and then become famous (viral, in this case). I liked it so much that I decided that I needed to use it as my stage name. Also, I’ve ever felt like I’m eating stones, so it suits fine on me. 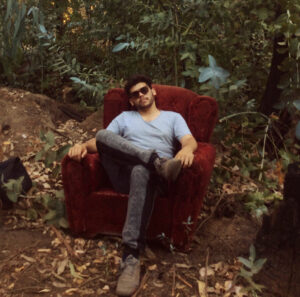 What has your musical journey been like as an artist in Chile?

I don’t really have very much to say about this since I’ve never ever been on a stage or presentation by myself. I used to play bass for the band “Histrionicos” and cajon drum for “Vendaval”, both local bands, there I sure did stand in front of a crowd, but I’ve always restricted myself from getting Comiendo Piedras out of the bedroom. I also feel like I’m very far from the chilean music scene, I don’t sing about politics, sex, drugs, etc. I’m just a normal guy singing about anything he feels, even if it’s just nonsense crap, as long as it makes sense to me it will be fine. That’s one thing I like about my journey, if there’s any, is that my music might never be trending, might be timeless forever.

How would you describe your music?

I think I’m into the alternative pop current, though I’m still finding my own sound. I grew up listening to Five For Fighting, John Mayer, Lifehouse, Alex Goot. I might have taken something from all of them, and nothing at all at the same time. I think it’s got a pretty common kind of sound, but there is no shame on that as long as I like what I did.

What inspired you to start posting your singing videos on Youtube?

I was discovering the youtube world back when I was a teenager (2010) and discovered Boyce Avenue and Alex Goot. I really got obessed with the idea of being able to record and produce music all by myself. Back in that day I only knew how to strum my old guitar, I started posting videos under another name that I used back then. It was a very long process until I learnt how to produce music properly, though I had to learn it all by myself, so I might have unorthodox methods.

In your collaborations with other artists, how do you decide which songs to do?

Most of the times I already have a song in mind before contacting other artists, but sometimes it’s them who have the song in mind. It’s a very fun thing to do and I really enjoy joining voices with another singers.

Is there anyone you hope to collaborate with next?

Sure, I have a ton of projects incoming with artists like Wolfgang Schwarz, Hugo Sellerberg, Evericagrin, Irving Gullfel, among others. And if we talk about high hopes, I would love to record with Jasmine Clarke, though it feels so out of my league right now.

Youtube has seen many of your original music releases as well as your covers of popular songs from other artists. Which song has been your favorite to record so far?

Difficult question right here haha, there are weeks of effort into each song that I record. I think my favorite original song is “No Entiendes Nada”. it was an experiment for me, and to my surprise the experiment turned out pretty well. And my favorite cover is my version of “2022” by Fother Muckers.

See also  Interview: Water Tower Inspires Fans To Take It "One Day At A Time"

After watching a few of your videos, it’s clear you’re an undiscovered gem in the music community on Youtube. Do you have any dreams of remaining an independent artist or would you like to be signed to a major record label?

I used to think that I didn’t have what’s needed, the talent, the charisma, and that kind of stuff. I thought that’s why I’m always undiscovered, but it really doesn’t matter now. I’ve come a long way and if I look back it’s crazy how much I’ve gone through. I intend to stay independent, it’s gonna be difficult to get noticed, but truth is I don’t want too much attention either.

How do you decide which song you want to cover next?

It’s very difficult for me right now. I used to search for the most popular song of the week and record it, but right now in Chile and latin america all the trending music is trap, and I don’t like that style because it has nothing to do with me, so now I’m doing covers of old classic songs, but it’s difficult to get views on those covers because nobody wants to listen yet another version when there are already a ton.

What can your fans expect from you next?

I’m working on a lot of fun things: an EP with producer Wolfgang Schwarz, a new music video, my first full length album called “Sumergente”, looks like I’ve spoiled all my surprises hahaha, I’ll just leave the rest for me.

My main concern right now is the COVID situation that we are all suffering. I have a lot of projects coming for this year. A lot of things that aren’t really paused because I’ve always done everything from home, but I can’t think of anything with this horrible virus killing our dreams.