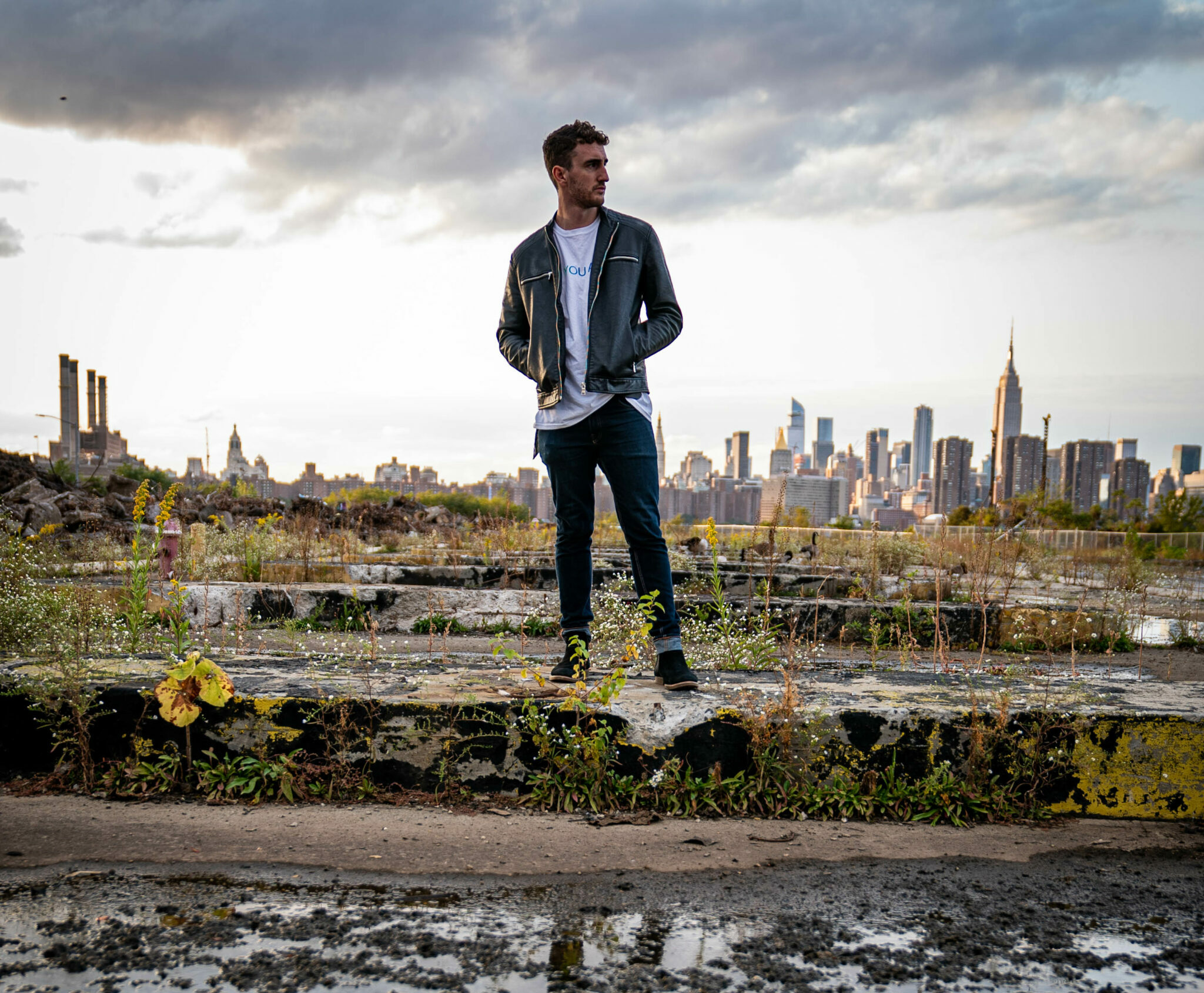 D.K. Lyons joins us today to discuss his newest album The Past (Romanticized) featuring the special releases of “Run to Me,” “Danger,” and “Long Way Home.” Check out our interview here:

Thank you for joining us! Congratulations on the release of your album The Past (Romanticized)! How are you feeling about sharing this single with the world?

Thanks for having me! This year has obviously been an incredible challenge for everybody on seemingly infinite levels, so it feels good on my end to continue to try and put my music and art out in the world to hopefully serve as a momentary distraction or release. “Run to Me” is one of my favorite tracks off the album and the accompanying video we’re putting out on the 30th might be my favorite one of the 7 we’ve made to date. There’s just a really haunting and desperate feeling to the visuals that really compliment the song well.

Which song from the album was your favorite and least favorite to put together and why?

This is a great question! I think “Danger” was my favorite because it was just so easy. I knew when I built the demo I had something special, and when we recorded it in the studio there was this feeling like we’d turned some corner and were headed for this culminating moment at the end of the album process. Just a lot of smiles and excitement with that one.

In terms of least favorite, I don’t think I really have one because I learned so much from each song, including certain struggles. Songs like The Getaway or Dance Like Shadows were challenging in that I was not satisfied with my vocal performances and went in and redid all of them in the final weeks before we finished, but again it was all just an incredible learning experience that has really built a foundation and confidence for my next body of work.

How did you decide on the title?

I had about a dozen random titles laying around initially, but this one was picked from a line in “Long Way Home” that goes “Running from a past that I romanticize in my head / forgoing any thought of accepting that it’s dead”, which I think just encapsulates the meaning and feeling behind this collection of songs, because they all are about my past, but seen through a set of rose-colored lenses.

What does this album mean to you?

This album was such a growth period for me, I had to work so hard and really learn how to be a craftsman when it came to the details in production, and I think I’m a better musician and better person having gone through it. I hope I look back in 5 years and think “While it may not be perfect, it was certainly a turning point in my life that set up everything that came after.” And then just hearing positive feedback from people I know and people online on literally every song, not just one or two. That really hit me because my intent was to make an album where there would be a little something for everyone.

You told your mother when you were 5 years old, “One day I’m going to be a rock star.” How does she feel about your success so far?

I mean, I think most sons will say this, but in my case it’s irrefutably true that my mom is an angel. A single parent of two young children working in higher education and magazine editing while dealing incredible loss, she has been a spiritual guide and the ultimate supporter of me since the beginning. And she’s been over the moon with pride in what I’ve been able to do so far, but my ambition is endless and my eyes are set on so much more to try and give back to her for everything she’s done and continues to do for me.

How did you first get started in music?

I started writing down song titles when I was 5 years old when I would just keep the lyrics and melody in my head, and I’ve since then written over 1,500 songs. Now, I like to say I learned 1,400 ways on how to not write a good song, but I truly am so in love with the process. But it’s something I’ve just always had to do. I’ve tried running away from it but I simply can’t. So I was just working behind the scenes on my craft until my early 20s when I finally had the confidence to start playing live, work in a studio, and release my first EP back in 2018.

Tom Petty has always been my north star, both with his musical example and his personal example as well. I tell people he’s been the most important father figure in my life and I never even got the chance to meet him, which speaks to the immeasurable impact he’s had on me. And more recently artists like The 1975, Third Eye Blind, Jason Isbell, and The Maine have shaped my musical journey and helped me refine who I am and who I want to be.

I try to stick to a “no clichés” rule in my lyrics first and foremost. Now, I’m sure I violate that rule without knowing it sometimes, but it’s definitely something I try to be aware of because I’m drawn to writers who hit me with something unexpected. I also like to create characters, give them some stark elements to them, and then whether it’s in a bridge or a third verse or a chorus extension, have some sort of moral twist or climax at the ends of my songs, because it should feel like your songs are going somewhere, not just treading water to get to each refrain.

You wear many hats in your personal world! What would you say has been the biggest part of your success?

It’s been a blessing to work in digital content and strategy for the early part of my career, that’s for sure! Just having a deep list of friends who are shooters, editors, strategists, social media managers, etc., I’ve got an incredible group of collaborators who have helped me bring my vision to life and improve my social promotion, especially in the paid space. Particularly trying to market yourself in a pandemic, paid promotion with the right content has become the biggest way to grow an audience. 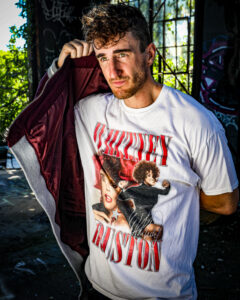 How has New York influenced your musical path?

I grew up a going to Boston all the time as a kid, and Boston still has such a homely and nostalgic feel for me, but New York is where my future certainly lies. The vibrance, the diversity of thought, the unpredictable nature of it; the essence of New York is discovery and I think that’s an incredibly exciting current that runs beneath me now, and it’s certainly influenced my songwriting over the past year or so that I’ve really opened myself up to that current.

You have a gift for storytelling! What’s the first thing you do when you sit down to write a song?

Thank you so much! It’s really never formulaic for me, it really comes from the ether with either a line or a character or a feeling that I need to somehow express, and then suddenly I have a fully formed idea in front of me. So it’s never the same thing twice, it really is organic and I tend to throw things away that feel too forced or process driven.

How has this year affected you creatively?

This year has been such a struggle for so many people, and I feel so blessed to have been in a position to come home to MA and set up shop in my mom’s garage for 4 months and really work hard on my live sound. I’m obsessed with the crafts of songwriting and recording, and have certainly kept up with that, but my primary focus has shifted to honing my live sound for whenever it’s safe to play live music again, in addition to really focusing on my social promotion and creating a cohesive and authentic visual aesthetic. In short, my to do list never seems to end!

There are certainly a number of proud moments within the last 6 months, whether that be reaching over 20K streams on my songs in a short time or the amazingly thoughtful reviews on my record, but the one that I’ll cherish forever was getting to play a couple of socially distanced live shows this past summer for a few dozen friends, family, and neighbors, and just getting to see that reciprocity that occurs when one of your songs makes someone feel something, and they then relay that back to you with some sort of gesture, whether it be cheering, dancing, crying, or laughing. And that’s the kind of energy that gives me hope for the future and specifically the future of music being able to unite after such difficult times.

I mean how can I not choose my mother?? She has been the ultimate supporter in what I do since the beginning, but she’s also an incredible writer in her own right and has always inspired me to hone my craft and really be authentic with who I am and what I say. And it’s a lesson that I couldn’t have learned from anybody else, so my mission is to do everything I can to build an audience and a platform so that people appreciate me for who I am and what I have to say, thus creating that reciprocity and validation for all of those years of her undying support and advice. I owe her everything and then some.

Thank you for speaking with us! For our final question, what do you hope to achieve in the next 5 years?

Thank YOU for having me! I have so many ambitions and projects and a seemingly limitless imagination for what I hope to achieve, but in the end I hope in 5 years that I’ll be able to look up and be proud of what I have created and released to that point and know that I still stand by it. Being authentic and constantly challenging myself to be better are two principles that mean more to me than anything, so I feel like as long as I can stay with that path, the rest will take care of itself.