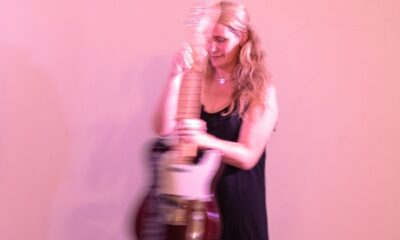 Singer-Songwriter Hannah Judson is based in Paris, France, but started out in the Chicago indie music scene. She has recently released “Stingray” on Boneyard Records, recorded in Sacramento, California and Fontainebleau, France. This set of songs are her most optimistic and forward looking.

Check out our interview to learn more about Hannah Judson and Stingray.

Welcome Hannah. Great to chat with you. Tell us a little about yourself! How did you get started in music? What led you here?

I live just outside of Paris, France but am originally from Maine. I lived in Chicago for 14 monumental years. During the Chicago years, I went to the School of the Art Institute of Chicago, bought my first electric guitar at a pawn shop (red), formed my first band (Salt Lick), and also my second (Sweet Bridget) and third (Kite Club). I played music the whole time in Chicago’s vibrant music scene. When I moved to France I thought that part of my life might be over. I had sold most of my equipment, though I did ship over my telecaster, an acoustic electric takamine, and two fender amps. In my new landscape, I began writing very different songs, not sure how I would bring them back out into the world. Chicago was a major chapter that clearly has influenced how I approach and value music. I have been so grateful to live in France for many reasons, but I have said over and over through the years, I miss Chicago. The music scene is incomparable. The winters are frigid, and still all that music finds its way up through the cracks in the ice.

You have an EP out titled Stingray. We would love to hear more details on it? What inspired the EP?

I started recording these songs in the summer of 2019 with producer JL Espada at Boneyard Records in Sacramento, California. Once we had basic tracks down, we looped in bassist Brian Clevinger and lead guitar Charlie Galunic, who were both in France. I wrote the songs in late 2018 and the first half of 2019, so they were all very fresh and current when they were recorded. Nothing too stale. Each song came out of a creative journey, tells a different story, and is fun to play. Several of the songs are really laid back, with a country vibe, several are a little surreal, several wink at the audience now and then, and several are full on rock songs. I think it’s a nice group, and while the lyrics have my signature quirky narrative element, they are among the more straightforward stories I have told. Lots of love in there.

I know it may be difficult to choose but do you have a favorite song from Stingray? If so, why?

Stingray is the title song of the album. It is a rock song describing a release from the shackles of an unhealthy relationship. It’s not about breaking up. It’s about understanding what was really going on, and no longer having space for the dysfunction in your life. The song comes out of the moment when a narcissist no longer has any hold on you, when the relationship is truly, finally over. It’s a moment of personal heroism, taking back control over your own well being, and a reminder to go gently with yourself. When dealing with people who are not playing by the same set of rules, you can get into a cycle of trying to heal or fix the relationship based on your own expectations of what it should be. It’s an anthem and a rock song and is fun to play with the band! It always makes me smile to play it. I had written the first verse very quickly and I knew I was on to something.I had to untangle my part in a narcissistic relationship, which was one of the hardest things I have ever done. It took years. I spent some time researching narcissism and the stages of breaking the hold, and I kept those in mind as the remaining verses unfolded.

Are you working on new music during this time of social distancing? What have you found to keep your creative juices flowing?

We have been let off the very strict lockdown that went on for 8 weeks here in France, though I live in a red zone, meaning, we need to be extremely careful. I have been working at my home studio, like I always do, so that’s a nice continuation of normalcy, but I must admit I have found it hard to maintain my creative goals in the past months. I have been working on my next record, but the songs are not coming easily. Everything feels very foggy. I am really disciplined by nature, and I have daily processes for rehearsing and writing. I never abandoned that throughout the lockdown, but it felt harder to do. I am getting back on track in the past 10 days. I think you just have to accept that some seasons are going to be harder than others in terms of creative output. When I am in good spirits, often I can just start playing my guitar and one idea leads to the next. These past weeks it’s been really important for me to listen to other musicians for inspiration — John Prine, Ani Di Franco, Lis Phair, Lorde, and so many more. If I can’t keep my creative energy moving, I can rely on others to at least remind me of why I am trying. Also, in times of low creativity, it’s good to just hunker down and learn a new skill, like diving deeper into FL Studio and committing some jazz scales to memory. It’s a different part of the brain.

What has been your favorite venue you have ever played?

What a great question! I have played at so many different kinds of venues. In Chicago we played Double Door a few times, which was always a feather in our cap. That venue has sadly shut down. The music scene in Chicago that ran up and down Milwaukee Avenue, and spilled down Division Street didn’t belong to one club. It was an expansive, expanding scene of major talent, crazies, locals, youngsters, everyone rolling around in the same mud. I miss it.

How does this EP differ from other music you have released?

This group of 8 songs does not have a weak link in my mind. Each song came out of a create journey, tells a different story, and is fun to play. Several of the songs are really laid back, with a country vibe, several are a little surreal, several wink at the audience now and then, and several are full on rock songs. I think it’s a nice group.

Tell us where to find you on social media and listen to Stingray.

You can hear Stingray on Spotify: https://open.spotify.com/album/5kWcMY07nyv4nWWkvoCLaH