When the Patricks take the stage, the crowd knows they’re in for a great time. This Irish Folk acoustic band has just released their second album Rocky Road to Ireland, a 10-track album jam-packed with traditional music from Ireland and hints of Celtic music.

In our interview, we break down the sounds heard throughtout the album, the process of putting it all together, and their upcoming live concerts that you should definitely attend!

How did you all decide on the band name Patricks?

At that time, we thought randomly to some names: we needed something easily recognizable and that could recall immediately Ireland and Saint Patrick’s Day, the most famous Irish festivity… what better than Patricks?

Instrumental sets including “The Butterfly/ Gold Stud/ The Man of the House” and “Glasgow Reel / Aaron’s Key / Banshee Reel” portray a unique sense of mastery for your instruments/sounds. How important was it to include songs that simply allowed the instruments to take over?

Instrumental songs are typical of traditional Irish music. Not only we wanted to follow the tradition, but it was also a stimulus to improve us. Moreover, in this way the album could evoke a typical Irish pub live session, in which it is possible to listen to both instruments and voices.

The 10-song album Rocky Road to Ireland displays your authentic and enjoyable acoustic Irish Folk sound in a few dance-inducing songs. Which song was your favorite to produce and why?

This is a difficult question because it is very subjective and we are emotionally related to all the songs. Probably we loved to produce particularly “Glasgow Reel/Aaron’s key/Banshee Reel,” because this set stimulated our musical creativity. Among the vocal songs, we really enjoyed the production of Rocky Road to Dublin: we had to sing all together and for the singer was a challenge to interpret a part typically played by male voices.

Is there any song on the album that has an interesting origin story as to how it came together?

Of course, the “City of Chicago.” Not only it retrieves one of the hardest Irish historical periods, but it came to our attention in a very special moment. We were in Ireland, in a band travel. After a dinner, in a pub in Doolin, once the song started, all the people in the pub fell silence and then started singing together. This really moved us.

The album has deep roots in old Ireland and Celtic music. How has the evolution of the band affected the overall sound?

We still had in our ears what is happening to traditional music in Ireland, which has become contaminated by rock, prog and in recent years even by electronics. In fact, both loops and stomp boxes are now normally used by lots of traditional groups. But, at the same time, we did not want to betray in any way the original sound of the band, that of a direct, straightforward, simple but energetic and leaping folk, which allows people to dance and have fun without having to think too much.

What was the recording process like? Did you work together on the songwriting and sounds or let it all flow naturally before uniting to blend the songs into one?

It was long but really funny! We always worked together. When one of us composed something alone at home, he/she proposed it to the band, that could always suggest modifications or not approve it. The intention was to appreciate all the album, in all its parts. Probably that is the main reason why it took a long time to finish it. But we are happy with our choice.

What instruments do you use in your songs?

We have a “fixed” band set, with drums, Irish whistles (Colin Goldie’s whistles), gaita, fiddle, banjo (Clareen’s tenor banjo), acoustic guitar and voice. For this album we had the featuring of two other musicians who played the bass and the accordion.

Your album cover is incredible and fits perfectly with the album title! How did this idea come together?

We worked with a professional artist, Norberto Filotto, who helped us focusing on what we had in mind. We wanted to represent our trip in Ireland, that singed us both personally and musically. But we love metal album covers and fantasy illustrations, so we had to decline them in a “irish way”!

Patricks currently has name shows and festivals booked for the Fall. Are you planning on incorporating anything new into your sets once you return to the stage?

We will play all the new songs recorded in Rocky Road to Ireland. In our fantasy we are planning a show with fireworks and flamethrowers from the stage, of course with protective masks, that are in the latest fashion. 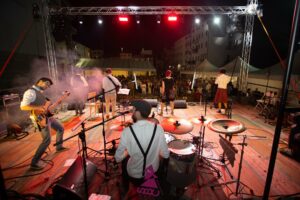 Thank you for speaking with us! What are your biggest hopes for 2020?

The main hope is to be able to play live again on stage!!