Izzie’s Caravan may have taken a decade away from his music but he’s back with new releases that you’ll definitely want to check out! In our interview we discuss his song releases, Zephyrs, and what’s coming up next in the future:

There’s tons of raw and authentic emotions in your newest EP, Zephyrs, which was recently released. What was the driving force of inspiration throughout the creation of this EP?

Honestly, ‘Zephyrs’ will always be the EP that was, in many ways, never meant to be…or at least not appear in the catalogue this early. It’s such a shift in gears from the preceding ‘Leo’s Guitar’. Anyway, I had a whole bunch of ideas on the shelf for a while, and one evening I was listening to Tom Petty’s ‘Echoes’ on loop. It was such an inspirational moment that I ended up going to work on the song Zephyrs and I guess one thing led to another and I ended up completing the entire EP. And I’m glad I did, because I absolutely love this EP and at a personal level it was very therapeutic for me.

Which song has the most memorable story for you? Whether it’s the writing process, recording sessions or release of the song.

It has to be ‘Leo’s Guitar’ – the instrumental track off the first EP. It’s the recording that kickstarted this entire journey. I’m a self-proclaimed Fender fanatic and I have a ton of strats and teles…so having spent most of my savings on these guitars, I figured I might as well lay down some tracks, the first of them being ‘Leo’s Guitar’. I did end up recording various different versions of it, but the one you hear on the record is the original first-take for it…on the spot solo. I figured it would be nice to preserve the original moment when it all began.

Have you ever had any fan interactions that were so unforgettable that they will always stick with you?

Sometimes I think the simplest words tend to stick with you for life because they’re truly authentic. I remember after Zephyrs came out, I had an individual come and tell me that while they weren’t a blues fan, the Zephyrs EP really touched them at an emotional level and that they were a fan for life. The sincerity with which those words were spoken really meant something because the songs themselves come from such a personal place for me, and the objective is that the audience relate to them at the level from which they were written.

Your third EP, On The Pull is scheduled for June 2020. What can you tell us about it?

Yeah absolutely. This is going to be regarded as my ‘identity’ record. It’s the record that I’ve always wanted to make…raw, gritty, fast-paced blues. I’m so excited about this one! I’m just wrapping up the production on it, some last minute tweaks…but this record is such a trip. I literally  have to stand up and listen to it because its so upbeat musically, and I had the pleasure of collaborating with some great musicians as well who stepped in and took it to a whole new level. I can assure you, classic blues-rock fans are in for a thrilling ride. It’ll be out on all digital platforms third week of June so get ready, and for all updates please visit my website at www.izziescaravan.com.

Do you have any special plans for its release or music videos associated with the songs?

Yeah we’re throwing around some ideas about videos and other promotional activities…so to speak. Obviously the current situation doesn’t allow a full-blown live performance release…so we’re having to be a bit more creative about the release.

After many years in the industry, your decision to take a break from music must’ve given you time to think about your passions. What inspired you to return to music?

I was out for over a decade from the entire scene and I think looking back, rather than seeing them as lost years, the appreciation I have for the guitar and music now is far greater than maybe I would have had if I had kept going. The biggest factor was easily rediscovering the blues…going beyond the surface-level and really studying the art of larger-than-life figures like Buddy Guy, Lightnin Hopkins, Johnny Winter, Stevie Ray, Clapton…the list goes on and on. So once I kicked that hornets nest, I knew I had to get back into music and this time do it and do it right.

What’s the first thing you do when you first sit down to write a new song?

The first thing I do is let the guitar speak…let it take me where it may. Often times a lot of ideas simply come out of practice, and practically everything you hear on these records is all borne out of a simple lick or a riff which then ultimately materialises into a far complex song. Lyrically, I tend to stay very real…in the sense, I end up writing about things I hear on the news, or , for example, on the upcoming record theres a track called ‘Drownin’ Man’s Blues’ which is about a blues player wanting to move to Mississippi which he considers the home of the blues…but in essence they’re just stories i’m telling about my life through the eyes of different characters. 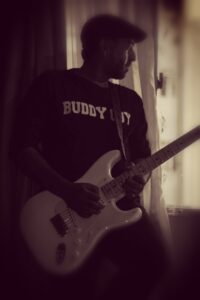 What’s your favorite and worst parts of the producing process?

This may sound contradictory, but my favourite and worst part of the recording process are the same…when I hear the completed version. It’s my favourite part because what was just a simple melody or idea in your mind is now a material reality and it’s such an exhilarating experience listening to the final version. But its also the worst part for me because theres this realisation now that its over…the process is done…the journey is complete. And it’s tough to let go sometimes. It’s been particularly hard this time round for On The Pull because I genuinely love these songs and the entire recording process was such a meaningful experience, I didn’t want it to end. But I guess the fate of these songs are now in the hands of the audience who will appreciate them.

By the time On The Pull is released, that will be three EPs released since December. Do you anticipate releasing another EP or single before the year is over?

Honestly, I feel so good about everything thats happening around me as far as my music goes…from the way the record has shaped up, to collaborating with great musicians, to the amazing promotional team…there’s a feel-good factor all around and I wanna keep this train going now. So, I’m just taking a month or so to really dig deeper into exploring the blues on guitar, and then getting back in the studio in August and have the next EP complete for a Christmas release. I really want to have a ton of music behind me before hopefully hitting the road next Summer.

Is there anything you’d like to say to your listeners who have followed you along through your music career?

A sincere thanks to the people who have listened to and liked my music. I really do appreciate that listeners can form a relation to the music because it comes from real human experiences. And that the journey is just beginning, so I welcome them to join the Caravan.