Joe Hodgson, who spent two decades in London writing, recording, touring, and honing his lead guitar skills in various bands showcases his unique and personalized guitar style in his newest single “The One That Got Away.” Read more of his story down below:

Thanks for joining us to discuss your music and upcoming projects! What are you currently working on?

Well I’ve just finished my forthcoming solo album Apparitions, which will be released in November, and I’m in the process of promoting the first single from it which is out on August 28th.

We recently discussed your newest single “The One That Got Away.” What was the writing and recording process like?

I wrote it in less than a day, and it took me another day to record the guitars, so that was fairly quick for me. That was because I had a really definite vision for it in my mind, and I could hear all the notes in my head before I even picked up the guitar. I then went to London and recorded the rhythm section and keyboards in a couple of studios there. And like the rest of my album, it was mixed in Ontario, Canada. It was a really smooth process from start to finish, and I think there’s quite an organic vibe to it.

Are you planning on creating a music video for the single?

Yeah, we shot a video for it earlier this year in Northern Ireland. It’s got quite a surreal feel to it, and it’s pretty interestingly filmed and edited. It was great fun to do, and it’s definitely not gonna be what people expect.

Well to begin with, it’s all instrumental, so if you’re expecting singing then you’ll be disappointed. The guitar takes the place of the vocal as well as doing what it usually does itself. I think my music falls broadly into the rock genre, but you’ll hear elements of the blues, some Latin vibes, funk and even a little bit of jazz creeping in there too. I think it’s pretty intense and it covers a range of emotions. I play quite a lot of slide on the album, and some of the tracks can sound quite mournful, while others are very upbeat and uplifting. I really wanted to make a varied album, and give every track a life of its own. There’s nothing worse than hearing an album and knowing exactly what’s coming, track after track. I prefer to be a bit more unpredictable, yet maintain the cohesion that a record needs.

On a personal level, definitely my Mum, she was everything to me. Unfortunately she fell ill while I was making the album and died before I finished it. She was my biggest supporter and the album is dedicated to her. Every good trait in my personality has come from her. As far as guitar playing goes, Gary Moore and Rory Gallagher made the biggest impact on me growing up. They were the two that really ignited my love for the instrument. Then there was Led Zeppelin, who were by far my favourite band. I used to listen to them on almost permanent rotation when I was at school, and of course Thin Lizzy. But my tastes are broad, and I loved mellower bands like The Eagles and ELO and a lot of Motown stuff as well.

Do you go to one specific place when you start writing your music?

I usually write things in my studio, that way when an idea comes to mind I can start recording it straight away, or at least get the basic idea down. I spend most of my life in there anyway, so it’s pretty natural that that’s where I write. It wasn’t always that way though, and I can’t count the number of great ideas that I’ve had over the years that I didn’t record at the time and that have been forgotten the next day. So the secret is to get them down, there and then.

You focus on capturing listeners with your intriguing melodies –  In what ways have you seen the physical effect of your music on those who listen?

The one I remember most was when this well known publisher came to see a band I was in, and he’d told us previously that he loved this particular ballad that we had written. He ended up in tears at the gig when we played it, and he offered us a publishing deal on the spot. Such a shame the contract was so crap…

What can you tell us about your upcoming album Apparitions?

Well the title comes from my Mum’s favourite poem ‘Apparitions’ by W.B. Yeats. And the line from it “Fifteen apparitions have I seen’, gave me the number of tracks that I decided to write for it. The making of the album came during a very reflective period of my life, I was at a bit of a crossroads, and I began revisiting my past and deriving inspiration from it. It became other-worldly at times, and tracks almost seem to write themselves. The overarching theme to the album is about how nothing ever stays the same and everything changes or decays. Lives are lived, and love is lost, but looking forward is the thing we can all do. No matter what people say, we all have regrets, but hope and optimism are usually only around the next corner. So it’s conceptual in many ways, and even though there are no lyrics, there were real themes and deep thought behind each track. I let the music go where it wanted, and I allowed myself to explore styles I hadn’t recorded before and really pushed the boundaries of where I could go musically. I played with total freedom and I was scared of nothing. 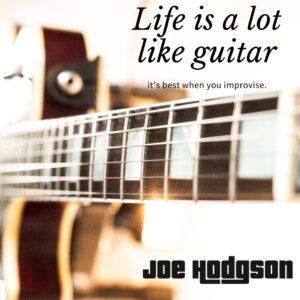 Which single are you most excited for listeners to hear and why?

I love the forthcoming single ‘”The One That Got Away”, that’s coming out on 28th August. It’s unashamedly got an old fashioned vibe to it, and it’s quite melancholic and intense. I wrote it in the aftermath of the break up of a long term relationship, and my guitar kinda documents all the feelings of longing and regret that I was harbouring at the time. I’m then releasing a double A-side on October 16th; ‘Serena Sonata’ and ‘Bareback Blues’, which I’m really excited for people to hear. I think they’ve got a certain edge about them, they’re very different from each other, and they definitely take the listener on a journey.

Melody is always top of the list for me, without hooks music is nothing. A good groove is always high up on the list as well. I always like to have a beginning, a middle, and an end in every track I write too, so structure is important.

We look forward to hearing new music from you! What are your goals for the remainder of the year?

I’m flat to the mat for the remainder of this year with promoting the forthcoming singles and the album. The end goal is to get as many people as possible from around the world to listen to and hopefully buy my music.

This album was labour of love, a long harboured dream, and I’ve given my whole body and soul to it. So I’d just ask people to give it a good listen from beginning to end when it comes out, and give it a chance. I’ve got fabulous guest musicians on it too and, it’s well worth 49 minutes of your time. I’d also ask for everyone to support musicians and actually buy music rather than just listening to it for free. A single cost £0.99 and an album £10, surely that has to be worth it if you like someone’s art.