Rapper Odotsheaman has stories to tell that instantly captivates the attention of new listeners. Whether it’s through his freestyled tracks or perfectly crafted gems, it’s clear he puts his heart and soul into the craft. In our interview, we discuss his path into the music industry, popular release “Closed Doors” and his upcoming track “Sleepless” available on June 1.

Thank you for speaking with us. Please introduce yourself to our readers!!

Your latest track “Closed Doors” is a laid-back blend of smooth lyricism and a clean production. How did this song come together?

Well, that’s an interesting one. So it basically started by me being at Kardo Blondes house, who’s the person that makes most of my beats. We were chilling at his and then he made a small loop of music. I then said you know what, let me freestyle to this. We recorded what I freestyled and then he added more to the beat afterwards. I then went 2 more times freestyling, but the last one was on a different beat, which then became “Closed Doors”. The first song I made up from that freestyle became “Myself”, featuring Rece Miller.

How did you decide on the visuals for the track?

I just wanted a clean video to look professional. I was at a Videoshoot filming my guy Ray Gambeno and we had the Rolls Royce out, and we were filming using a Cinema Lens on an Atomos Ninja, so I said you know what, let me just bang this out quick. And I know a lot of people are confused as to why I’m wearing a Sidemen hoody in the video, it’s because I got it from Konstantin at Tobi’s Videoshoot. If you know you know.

What inspired you to pursue music?

Well originally it was the older guys from my area. I used to go to a youth club in Crystal Palace, South East London, where all the older kids would rap. I remember people like Konan from Krept n Konan, and Bouncer would be there. Sometimes the youth club would bring out decks and people would MC. Then one day a man came in to teach us how to rap and perform and since then that’s all I’ve been doing. I was roughly 10 years old.

What goes through your mind when you write new songs? Do you have a specific ritual when it comes to songwriting?

Before when I was younger, I used to just write 16 bars a day, then when it came to making a song I would just draw for a random 16 I’ve previously written. Now, with the way musics going its more about the vibe, rather than hard hitting lyrics. So I will literally listen to a beat for the first time whilst voice recording myself, record all the melodies, flows and bars I come up with on the spot, then I’d write them down and improve them. I don’t really have a ritual, but I do usually have an alcoholic beverage next to me.

Your upcoming track “Sleepless” is set to release on June 1. What can you tell us about it?

Sleepless was also a freestyle, as many of my recent releases are. I recorded the song in September 2019. I wasn’t doing anything with it because I just wasn’t feeling it. I then took a holiday to Amsterdam and thought you know what, I can improve this, but with what I’ve got, let me shoot a music video to it. So I shot a video in Dam and got the song redone with Kardo Blonde. He fixed up the beat and done the mix down. I also shortened it and took a verse off to make it 1:57 long, because 157 is my lucky number. 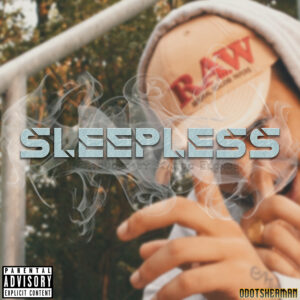 Are there any artists who influenced your interest in music?

Yeah definitely, some you may of heard of and some you may have not. Lil Wayne, Krept n Konan, RedZ, Weazy, Ginger, Lil Durk, 50 Cent, Lloyd Banks, Missy Elliot, Busta Rhymes, Smiley_61st, Bobbyraps & Spooky Black.

Alive, it would have to be Lil Durk or Lil Wayne. Dead would have to be someone like Michael Jackson, because I know my mum used to love his music, and could you imagine him on a trap beat. Wavy.

Which song of yours is your favourite & why?

What’s been your greatest musical accomplishment so far?

I think maybe holding my own shows and having people pack out the venue. I’ve had 1000’s of views 1000’s of streams, but nothing compares to everyone tryna talk to you and show you love and enjoying themselves because of you.

My goals for the rest of 2020 are to just keep going in the direction I’m going right now. The only way is up and I honestly believe that if I stay consistent, then that’s all I need to make it.