Interview: Rikardo Set To Release “Thinking ‘Bout You” On May 29

Rikardo has an abundant amount of skills as a Sound Designer, Field Recorder, Audio Engineer, Producer and DJ. With music being one of his main focuses in life, Rikardo is set to release a new single after feeling inspired during this period of quarantine. “Thinking ‘Bout You” tells a story of love growing between two people during the summer. Although they have great moments together, the protagonist wonders if their love will survive in all the seasons or just the summer.

Check out our interview to learn more about Rikardo and “Thinking ‘Bout You”!

Your new single “Thinking ‘Bout You” is set to release on May 29. What can you tell us about it?

“Thinking ‘Bout You” was composed in the quarantine period. My intention was to talk about a love story and transmit it through the rhythm. After composing a Rythm & Blues groove, Silja was good at writing a lyrics on the subject.

“Thinking ‘Bout You” is romantic – as detailed in the song and single cover. What was the inspiration for the cover?

The single is about a love story that sometimes disappear and reappears. For this reason I decided to represent this story through a crumpled film inside which two men kiss. The story was attributed in particular to the period of the summer of love and therefore for the logo I took inspiration from some posters from 1967. 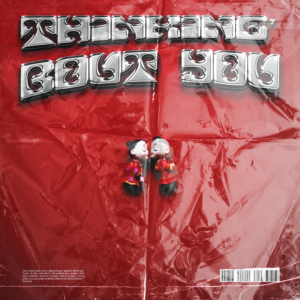 How did you decide on your artist name Rikardo?

It was 2017 when after I broke up from the electronic duo I had to decide which name to use. Matteo, one of my old managers told me “But why don’t you use your name?” From there I decided to keep my name but adding a “K” that for me represented the desire to make music. 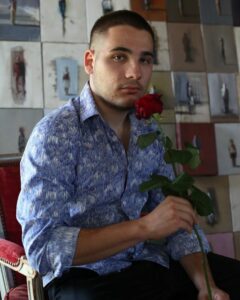 With my music I want to transmit love. I still have a lot to learn and improve but in a dark period like ours I would like to find more respect.

Do you remember the first time you performed live for a crowd? What was that moment like for you?

Yes, I remember it very well. The first time I performed was in Mantua in a small bar and my legs were shaking. Then from there I went to a couple of stages in front of a few thousand people in Monza and Treviso. The best thing is to see people’s reaction while playing your music.

What are your short-term and long-term goals with your music career?

At the moment I have many things to think about. The thesis, the work. I do sound design not music. Music is a hobby. I will try to release another single better than this one by the end of summer but I don’t plan anything, I try to do my best in everything I do.

Definitely my experience. Everything I have learned and experienced in these years. They are few and I still have a lot to do, however the school has helped me a lot.

What are the best and most challenging parts of creating a new song?

Certainly the technical part affects a track a lot. But the most complex part for me is finding a sound identity and maintaining it because I really in love with all sounds.

The first “Disco” record certainly influenced me a lot. I really like listening to vinyl records of the late 70s and early 80s. In the background there is the pop of 2020 which has a very plastic and compact sound but this is not the case with “Thinking ‘Bout You”. We will see this characteristic maybe with the next release.

As summertime approaches, more summer flings like the one you mention start to appear. Your single will be relatable with many listeners. How do you think listeners will react to your song?

I hope people enjoy listening to the song. For me it is only the first release and I am sure I can do better with the next one, for this I hope people stay tuned on my channel after listening “Thinking ‘Bout You.” I think that many love stories are born in the summer. Thinking ‘Bout You has a lyrics in which everyone can identify themselves. Who hasn’t had a love story like this?