Roy Shakked, composer, producer, and recording artist, sits down with us to discuss the release of his upcoming EP I’m Telling Everyone coming this July 6! Check out the rest of our interview down below:

Thanks for speaking with us! How’s everything going?

Going great. Just finished building my new recording studio a couple of weeks ago and I’m tinkering with all the knobs, amps, keys and strings. Really enjoying my new setting.

That’s a tough one. I’ve made pretty eclectic music over the years that would fall under quite a few genres but I would say my songs are mostly rooted in traditional 70’s style songwriting, with a dash of The Beatles and a more modern production approach.

Please tell us more about your upcoming EP I’m Telling Everyone. How did this EP come together?

Four out of the Five songs were written after I met my life partner nearly 2 years ago so they seem like an organic, integrated piece of work to me, worthy of releasing together as an EP rather than waiting til I complete a full album. Oblivion, is about leaving my old life behind and jumping head first into the new relationship; Natalia is a love song dedicated to her, and In Winter is a song written in anticipation of our daughter’s birth. I’m Telling everyone is a bit more open to interpretation but absolutely about letting go. The final addition, Five Days a Week is a remake of an old song of mine that I’ve always loved. 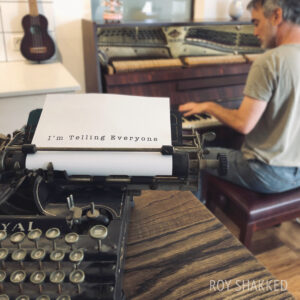 Is there any song on the EP that has an interesting origin story as to how it came together?

Well, regarding Five Days a Week – it was originally written after I left my last 9 to 5 job, vowing to never hold an office job again. So far so good, and I’m thankful for the fact that I’m able to live off of what I love doing every day. It was originally released on the first Holmes album (One of the artist names I’ve used in the past) 12 years ago. This time around I dressed it up in a new arrangement with a couple of my favorite musicians – Tamir Barzilay (Macy Gray, Scary Pockets), upright bassist Yori Oron and percussionist Joca Perpignan – all on the video clip for the song – recording from their respective studios during these coronavirus times.

What’s the inspiration behind your latest single “I’m Telling Everyone?”

The personal meaning for this song keeps changing. It was written in a free-flowing, associative fashion and is a bit ambiguous and open to interpretation. It can be about giving in to a relationship, a philosophy, a religion, politics or anything else. In a sense it’s a self-discovery piece but I’d hate to limit the listener’s imagination – apply what you will to it.

How do you plan out the visuals for your songs?

It’s different every time. I usually watch a bunch of stuff online, trying to find something that inspires me, while being financially feasible of course.

How do you hope listeners feel when they listen to these songs?

I just hope they feel, period. If it takes them out of (or alternatively enhances) their current reality even just a tiny bit, I’m satisfied.

You’ve had a few memorable last few years as a composer, producer, and recording artist, what’s the most memorable experience you’ve had?

I can’t say one stands out above the rest. Being the music supervisor and song-writer on Netflix’s Greenhouse Academy, and scoring the Japanese animated show Beyblade were both super fun and absolute highlights, but releasing 3 Eps of my own over the last 2 years brings me a different kind of satisfaction that can’t be topped. Lucky to experience all angles that come way.

Which song of yours has ever made you feel like “this is the one” in regards to how many people it has reached, its effect on listeners or your inner feelings of it reaching a certain level of success?

“Caught On Fire” (released under my pen name Holmes) is my most successful one to date and I love it. Can’t argue with a couple of million streams but I’m not sure it’s my absolute favorite. Maybe “Nothing At All” or “Oblivion” from my upcoming EP. It changes depending on my mood. There are also a handful of songs I just can’t listen to anymore and wish I never recorded, which I won’t mention by title here…

Too many to mention all but let’s start with the classics – The Beatles, David Bowie, Stevie Wonder, Jeff Lynne, Donald Fagen, Prince, Paul Simon and many, many others.

It varies. Sometimes it starts with a chord progression that I like and I try to fit a melody or short hook on top of it. Sometimes I just have a line or a rhyme I dig which I try to develop further. I rarely start writing from scratch about a subject matter I want to tackle. I wish I had that skill. The songs usually reveal themselves to me as I go.

You share a deep sense of openness and vulnerability in your songs that your listeners can identify with. How important is it to you to be this open with them?

It’s important. I find that I’ve been getting more open over the years. My earlier songs are a bit more technical, less revealing and at times cynical. I can’t say my style is autobiographical emotion-on-sleeve but it seems I’ve been putting a little bit more of myself into every song these days.

Do you remember the first time you performed live for a crowd? What was that moment like for you?

Yeah. And it wasn’t with my music. It was a high school talent show and I was breakdancing… Scary and exhilarating, and in hindsight probably not that good. 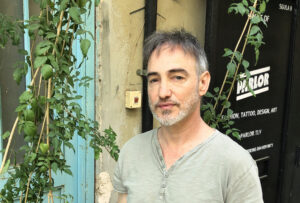 Beck and Sufjan Stevens are both huge in my book but I’ll collaborate with anyone who makes anything that sounds interesting to me.

My EP comes out July 6th and I’ll probably be releasing another song by year’s end but I’m mostly going to be spending time with my newborn girl.