Soviet Spacedog joins us today to break down the release of his debut album A Shotgun State of Sunshine. The experimental electronic musician enlists a fascinating approach to his psychedelic pop music instantly grabbing our attention. Check out the rest of the interview down below:

Thank you for having me.

Apocalyptic, for the most part. It’s been strange to watch the country buckle under the pressure of an election and a pandemic at the same time. It’s been a very radicalizing year for me, politically, as I’m sure it has been for a lot of people. Isolation—quarantine—is really tough, even as someone who likes to keep to themselves normally. I’ve definitely always liked having my own space and just kind of doing my own thing in that space. Though I will say after almost a year of staying in my home except for beelines to work or the grocery store, I am kind of looking forward to going to a bar or something once the vaccine drops.

What was the inspiration behind your artist name Soviet Spacedog?

It’s a reference to the Soviet space program back in the 50s and 60s. They would stick animals—lots of dogs—into rockets and blast them into orbit just to see what happened. Some survived. Some didn’t—Laika is a famous example. I like the idea of an artist name that feels ephemeral, like a relic of the past, and a little bit tragic. Plus there’s a sci-fi element to it that tickles me.

How long was this project in the making, and what were your hopes in terms of what people will take away from it?

Recording started in October of 2019 and concluded sometime around June of 2020. It’s very personal, kind of an update on me and my life, directed to people close to me. I’m not very good at social media and I’m not very good at keeping actively in contact with people I care about, so I kind of tend to disappear from people’s lives for large chunks of time. In a way, the music I write is my way of saying “hey, I’m still here, here’s what’s happened to me recently, etc.” It’s a record of my life and state of mind over the last year or so.

How did you decide on the title?

Shout out to Reddit user comedymold42 whose one and only post is a comment about mishearing a Strokes lyric as “shotgun state of sunshine” thereby naming my record. I choose to believe comedymold42 is an interdimensional emissary sent to Reddit with the sole purpose of giving me this title.

For me, it felt like a pretty apt description of my depression. Spending most of my time coasting on neutral or negative emotions with these random, shotgun bursts of energy and positivity. I try to ride those out and squeeze all the productivity contentment I can until things settle again. I live for those bursts, just have to believe the next one is on the way.

What has been the most exciting part of releasing A Shotgun State of Sunshine?

This is the first solo record I’ve done in years, for a while now I’ve been working with my buddy Declan on our band Radio Macbeth. After we released our second record we decided to take a bit of break and release some solo stuff on our own—just trying to explore what our individual voices are like now after writing together for a while.

It’s been nice writing and arranging music that is totally my own, to get back in touch with what I want to write and what I want my music to sound like when I am the only one making decisions. It’s been really interesting to hear his solo work as well—Sloptrough and Lightspeed Scooter—and see what he values most in his songwriting and arrangements.

It makes me think about other bands compared to their members’ solo work. When you listen to solo work from the Beatles, you can definitely hear what each one added to the band, you can hear how John+Ringo+George+Paul = the Beatles. But Soviet Spacedog+Lightspeed Scooter, or Sloptrough even? Does not equal Radio Macbeth, at least as far as I can hear. I wasn’t expecting that, and it’s a really cool perspective to have. 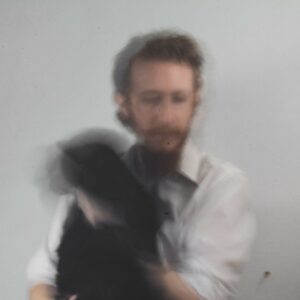 Which song was your favorite to produce and why?

They were all a blast, every song gets its own soundscape, synth patches, guitar tone, glitchy noises, etc. My favorite journey was probably Gravity, that song took a while to nail down. It was originally going to be on RadMac’s second album, Trapped in a Prison of Infinite Style, but it got cut before we settled the tracklist.

The original version was a lot more mellow, dramatic, lots of strings, emotional, or as Declan would tell me: “kind of gay.” I spent some time piecing out what I was really trying to say with it and retooled the lyrics a bit. Most of my songs start out with vague lyrics, mostly just playing with words and imagery until something sticks. All it takes is one line or phrase that really hits me and the rest of the lyrics will fall into place. Once I have the core message solidified, then I know what it’s supposed to sound like. And some songs, like this one, just take quite a bit longer to unearth.

Walk us through your journey of creating experimental electronic music.

I think Radiohead was the first band I listened to that showed me you can fuse traditional rock elements with electronic and experimental elements to create something unique and beautiful. But Wren’s album Nostalgia is probably the most important record that got me to see electronic music as the way I wanted to express myself.

What’s the best piece of advice you were ever given in life?

My friend and his wife own a cupcake shop. He taught me to cut off the bottom half and put it on top of the cupcake so you’ve got a little sandwich with the frosting in the middle.

It’s all scraps and fragments. All-day long I’m taking notes on my phone of words, phrases, gibberish alliterations, nonsense rhymes. I am constantly amassing a pile of language to draw from when I need it. Every once in a while a particular phrase will stick with me, maybe even a melody. Then I scroll through all the notes in my phone and start trying to connect them to different phrases, like trying to stick puzzle pieces together. Most things won’t work, but every once in a while a couple of elements will. I just keep building on that until I’ve got a structure to start editing.

I love the sound of glitched audio, digital artifacts, dissonance. I spend a lot of time on sound design in my arrangements, running instruments through various effects to try and create unique sounds. I want to pull the listener back and forth between something catchy and something strange and unfamiliar.

What would be your dream venue or event to perform at?

It’s a small bar, dim lighting, the audience is no more than 15-20 people, they’re all close friends, I’m onstage making weird noises, singing about how sad I am, and not having a panic attack.

How would you define success?

I don’t know yet, I think that’s the root cause of the ever-present ennui in my life. I’m not sure what success means to me. I think I just want to be able to express myself fully, and love the ones around me who do the same. I want to see and be seen.

Inspired by the likes of The Postal Service, St. Vincent, Radiohead, and Tame Impala, what kind of music did you grow up listening to?

Believe it or not, until I reached high school I pretty much listened exclusively to Weird Al. Straight Outta’ Lynwood was the first CD I ever bought, up until that point I was listening to pirated copies of his discography.

What is your creative process when it comes to creating new music videos?

Usually, I first take into account what I have available to me and start from there. The Fragile Machine music video came to me while I was exploring some of the caves around my city. “Gosh, I’d love to film something in one of these,” I thought. So I did. I like videos that are simple, kind of weird, and kind of goofy. I’m not interested in looking cool or high production value or anything. I think sheet ghosts are cute, I think cryptids are cool, I think outdated video technology looks interesting.

Thank you for taking the time to answer our questions!

Thank you, again, for having me.