Independent Musician based in Staffordshire, England speaks with us about the release of his debut album 5 Years and ending the year with a Covid-19 inspired single “Covid Christmas.” Read more down below:

Welcome to Music Trails! How has 2020 been for you?

2020 has probably been one of the most surreal experiences and it’s just like nothing that’s ever happened in any of our lifetimes but I have to say it has been a really positive year for me not just in terms of music but in general day to day life as well.

Congratulations on the album release of​ 5 Years​! How long was this project in the making, and what were your hopes in terms of what people will take away from it?

Thank you! Yeah, 5 years has been one of those long things sitting in the back of your head that you sometimes think about doing but then forget about it again. The albums called 5 years because realistically that’s how long it took to write it, it’s a collection of the best songs I’ve written in the past 5 or so years and it took everything going on in the world at the minute to give me that free time to actually sit down and polish it up and turn it into what you hear today. I think for me I just wanted people to listen to it, I wanted my sound to be out there and be heard which it has and that’s fantastic. There isn’t any real overarching message on the album, each song stands on its own and has a story to tell so for me the fact that people have listened to it and liked it is just incredible.

What has been the most exciting part of releasing this debut album?

Finishing the album and being able to listen to it in the car or when I’m walking along is just incredible. Just knowing that I created that and its now out there for the world to hear is a really difficult sensation to put into words, I’m really proud of what I have achieved.

Tell us about “Covid Christmas.” There have been so many songs released related to Covid, what makes yours different from everyone else’s?

‘Covid Christmas” started as a joke between me and a friend and at the time I was trying to find some lyrics to a new song I was working on and just thought ‘’why not use this idea of Christmas not being the same as it usually is this year.’’ And for me that’s the thing with Christmas music, it’s all very similar in the topic but this is different and that’s why I pushed forward with it and released it. I never wanted to do a Christmas song but this whole situation gave me an excuse to give it a go and I’m quite happy with how it turned out.

Have you planned out any visuals for any of your song releases?

I’m looking at doing a music video in the future but probably not for anything that is already released, that’ll be a project for new music in the future.

Walk us through your journey of creating music. In what ways did your upbringing inspire your musical journey?

Writing music for me always starts with an idea, a story to tell, and from that point forward I will try to find some form of chord progression that gets that feeling across. Because my background in writing music stems from cinematic pieces, having worked as a composer in the past, I always feel like the music should be able to stand on its own in delivering the emotion and the lyrics are just like the icing on the cake. I’d say the only song I’ve ever written that doesn’t work like that for me would be Flapjack because I had that chorus melody in my head and I knew I had to use it to write a song about that specific person because it just seemed to fit in my head.

2020 has been a long journey for many artists coming up in the music industry. How has this year changed the game for you?

This year has been the year where I’ve finally started releasing and that’s probably the biggest thing that this year has delivered for me. It’s been the driving force for me to actually give this crazy idea that I could be a musician a go!

What’s the best piece of advice you were ever given in life?

Without a shadow of a doubt, the best piece of advice I was ever given was that positivity breeds positivity, the idea that having a positive mental attitude means more positive things happen is something that I now live my life by. It’s something that was told to me by an old manager and at the time I just thought it was a load of rubbish but in the past 2 years or so it’s really resonated with me and it’s something I always remember every day.

What artists/ kind of music did you grow up listening to?

I grew up listening to such a wide range of music, my playlist can go from Slipknot to Beethoven and then on to Tech Nine. So I wouldn’t say I draw influence from just one source but in reality many different ones. I’d say in terms of my vocal performance though one of my biggest influences is definitely Freddie Mercury, his raw vocal power coupled with his incredible range and technique is definitely something I keep in mind when recording vocals.

At the minute I’m listening to a lot of acoustic singer/songwriter type stuff. It’s a sound that delivers a lot of emotion which is always something I try to do with my music so it’s quite good for inspiration. And I’m listening a lot to Ed Sheeran’s Divide album which has a lot of great production on it.

What’s your plan creatively for the upcoming months and years as an artist?

Well, I’ve recently started recording demos for my next album which I hope to get out by the end of 2021 or early 2022 at the latest, and I’m also working on a collaboration with another local artist to myself which is being kept under wraps at the minute but should give some great opportunities to take me out of my comfort zone and try something a little bit different.

What’s your songwriting process like, and what are the main values you hope to bring to the scene?

Like I said earlier for me I just want people to enjoy my music, and I hope that people take something away from it, be it just loving a song or loving the message of a song that’s what I want to bring to the scene.

Is live performance a part of your plans for the future?

Live performance is definitely something that is coming from me, it’s just a case of waiting for venues in the UK to reopen and for things to start to get back to some form of normality, and then I’ll be bringing some really unique new ideas to the live music scene here in the UK. 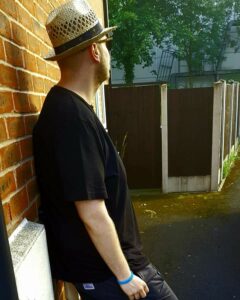 Just a huge thank you to everyone who listens to my music and supports me, I’ve always been skeptical as to whether people would like my music but I’ve learnt that truly people do which is fantastic and I cannot thank those people enough.