Interview: Water Tower Hustle Everyday To Connect With Fans After Release Of “Fly Around”

With their debut album, Fly Around currently available, this indie-folk/bluegrass revivalist band Water Tower is sharing their musical gifts with the world! After reading our interview, check out their Facebook live calls to hear more music!

Your collaboration in “The Burrito Song” is completely unforgettable! How did this song evolve from an idea to a full length song?

I heard Doc Gunn play “The Burrito Song”, and I my jaw literally hit the floor. Doc is able to capture an element of Americana lifestyle and Cali-Tex-Mex vibrations that is so unique and direct that anyone could relate to it. When he played the song, Tommy and I realized we needed to record and produce the track immediately. So that is what we did. We sat Doc down in our studio (Water Tower Studios) and had him create a passionate guitar and vocal take. The cherry on top was Tommy’s Dwight Yoakam-esque guitar stylings in combination with me on the stand up bass. Mandolin was provided remotely by Billy Lupton (Wicklow Atwater), a RAD punk-grass LA band. As far as the story of the song, Doc had seen a man eating a Carne Asada burrito in a very sensual manner, while at the maverick gas station, in the freezing cold.

You guys are constantly on live calls on social media with your listeners. How important has social media become to you since the quarantine?

We LOVE to be able to connect deeply with our listeners. Social media has been a complete game changer for us. Because we used to make our living on the streets busking for so many years, it prepared us to talk to five screens at once across hundreds of listeners and many conversations all at the same time while writing and playing music on the spot. Last night we had some major breakthroughs while on your live showcase for Monk’s Tavern in Missoula MT. Towards the end of the show we started writing a song and the fans kept narrowing in on better and better lyrics. So by the end of the stream we had a REALLY cool song that we wrote with 30 of our best friends. Thank you for getting us that show BTW ; )

What makes your music unique compared to everything else being played all over the world?

The thing that makes our music unique is literally how unique it is lol. I realize that sounds slightly crass to answer that way, but what I mean is that we may play the same ten songs at 12 that we do at five, but we may change the key, the style, the emotion, the lyrics, or the time signature at any given time depending on the mood of our listeners. We are always taking the crowds temperature and asking them what they want, therefore our sets are directly tailored to their needs in that very instant. The reason that busking for freeway offramp traffic for eight years prepared us so well for this moment in time is because it forced us to run in between cars while playing music, holding multiple conversations across four lanes all while taking money and remembering lyrics and answers to the many questions we got daily about what we were doing playing music for cars.

As the sixth studio album for the founder Kenny Feinstein, what’s the most memorable part of creating Fly Around?

The most memorable part of “Fly Around” is the moment it caused me to realize I needed to leave Portland. Don Bolles (The Germs) and I were on the phone together and I asked him why I should move to LA, and he simply said “It’s better.” I knew in that instant that my whole life was about to change. It was as if his words made more sense than anything I had EVER heard in my entire life.

Well I would say Don has mad a big impact. Another person who has influenced me deeply is Tim Timebomb of Rancid. We had the pleasure of producing a record together last year for Rosy Nolan (also a bsquared client ;). Tim is so very kind and humble for such a wise and honest man,.

What do you hope to accomplish by the end of this year?

By the end of this year I hope that we have been able to get back on the road to meet ALL of these amazing friends/fans we have met during Corona.

I am most proud of us finally releasing this album after seven years of Murphy’s Law hitting us in the face. 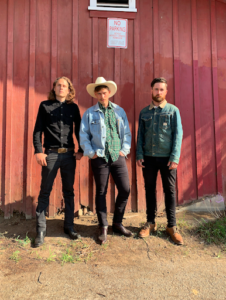 We write our music next to the cars mostly, but now we write with the fans : ) So does Dre Drinkard from his FB page at night! He makes Trap songs with the fans LIVE on his page… our banjo player!

Weezy and Blink 182 are our DREAM collaborations.