Finding inspiration in the tiniest yet memorable moments of his life, singer-songwriter Stephen Guizar keeps a portfolio of experiences in his back pocket now coming together as his newly released album With Love, now available on all streaming platforms.

Each single in the 11-track album includes its own familiar yet distinctive elements, which he mentions tend to naturally evolve throughout the songwriting process. He’s taken experiences from his life and created them into these short seven masterpieces filled with all the emotive feelings of love, pain, vulnerability, and success he’s gained throughout the years. What’s admirable about his creative process is how he maintains an open mind to how songs will come to him, whether it’s by actively practicing on a keyboard or guitar, hearing random melodies in his surroundings, or waking up with a vocal melody already in his mind further inspiring him to finish the songs to share them with his listeners. As inspiration strikes, Stephen can capture the unexpressed stories into demonstrations of what he’s been able to create.

This is his confessional catalog of projects coming into one that he hopes further inspires listeners to take their stories and turn them into their masterpieces.

Ooooo I like this question! “Retrograde” was most difficult because it sounded the most…. typical? Conventional of them all. Even if the creative process felt natural, it still felt like I was selling out. Thanks, paranoia. My favorite and easiest song to put together was “Your Love” not because it’s my favorite musically but because it felt most natural.

The standout single from the album for us is “Waitlist” due to its vulnerable state of presence showing Stephen truly opening up his heart to the world. It’s the first introduction of what he can create with his music delivering a slow-tempo jazzy groove coming to life with free-flowing beats of the drums and soothing, gentle vocals making it feel like we’re right there in the room with him as he transforms each separate idea into a stellar production worth more than one listen. The use of ambient noise helped creatively transform what was in his head into a soundscape worth keeping in your playlists. We enjoy the pitter-patter, in the beginning, making it feel like a lullaby about to put us to sleep but then picks up into a jazzy feel embracing how the calmness of the instruments and familiar car sounds unite into one concise, memorable beat we weren’t expecting.

Our favorite single “Kaliope” displays Stephen in a mellow, soft way explaining those difficult moments when you fall into the feelings of infatuation for someone else. “Creating it helped me come to grips that the affection I had for this individual was unhealthy,” he mentions. The synth-pop single includes mesmerizing vocal harmonies and soundscape placed together after over 40 hours of reflection and undivided attention into this single depicting the familiar pain that many listeners will be able to identify with after listening for the very first time. Its low, hushed vocals feel like a confessional moment as he expresses his feelings. It reminds us of those moments when we fell for someone during the beginning stages, moving us to want to be closer than ever even though it may not be the right thing. This single brings back those thoughts that mold together with a peaceful, serendipitous feeling we can replay over and over again.

“Retrograde” humanizes that push and pull feeling of moving one step forward and two steps back. He describes that relatable strong desire of wanting to be a part of something or someone’s life so badly that it’s important to put in the effort from the very beginning but also realizing that you’re digging yourself into a deeper hole by doing this. The upbeat single finds its place as one of the singles truly displaying how his vocals can capture our attention along with the strums of the guitar and introspective lyrics questioning how the world around him moves from a day to day basis. His singing is truly the best part of the entire single since it shows him in a different light.

What’s your favorite lyric from the new project, and why?

“Why is it/ I move on retrograde motion?/ And why is it leaves blow the opposite direction?” Sometimes speaking poetically reflects how I feel much more accurately than if I were to speak practically or literally. This is a prime example of that. 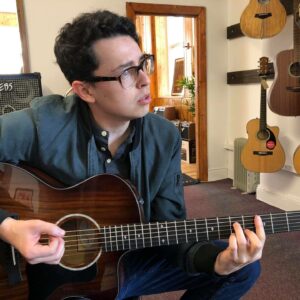 The singles “Turtle Shell,” “If You Know,” and “Should Grab a Jacket,” come to us through an alternative mode of creation as they weren’t from any profound experiences in his life. Sometimes the best things in life come unexpected and in the process of not relying on inspiration to strike, he focused on the ideas that came to mind and quickly became something out of nothing.

“ 亀の甲羅” also meaning “Turtle Shell” opens and finishes with a cassette recorder smoothly embracing the slow-tempo beat of the drums, shuffling of instruments in the background, and consistent rhythms keeping the flow going until it transitions into the making it feel as if we’re on the beach somewhere enjoying the blissful sun. It’s a brilliant move adding the cassette sounds to make it feel like the start of a new beginning that comes to a complete circle by the end. It’s not an element we hear much of these days. “If You Know” represents a significantly different mixture of sounds Stephen can create. He integrates an incomparable blend of guitar hooks, and lyrics depicting how he’s discovering who he is and the relationship he’s describing. The intriguing message in the beginning before transitioning into its upbeat vibe completely changes the energy of the rest of the album.

“Should Grab a Jacket” merges his hypnotic, repetitive vocables, setting the mood of a calming night in the middle of nowhere where a jacket is needed to stay warm. The sounds of the xylophone stand out amidst the muffled, slow and steady clinks from the musical instrument Mbira/Kalimba (traditional to the Shona people of Zimbabwe) increasing in volume with the inclusion of his comforting hums and vocals. It’s a breathtaking new single and the more we listen to it, the more it captures our attention how simple yet effective the instrumental bits and his comforting voice perfectly align.

It’s amazing how refreshingly different With Love is to everything we may be used to hearing daily. Stephen releases a powerfully vulnerable collection of songs sharing the stories he’s held on to for many years, which we admire and hope he continues to share as time goes on. The 11-song album will also feature singles “Prograde,” “My Love,” “Vacation 1966,” and “Your Love.”

He shares, “songwriting is a skill you must sharpen; if you wait around for inspiration to strike, you aren’t going to get anything done. These were written and produced out of my love for songwriting, and they were equally as fun to create than anything else I happened to make out of inspiration.”

Find the release of With Love on all streaming platforms and keep up with Stephen Guizar on all social media platforms to discover the latest music releases coming our way. We’re positive he’ll be delivering many incredible productions in the future capturing the significant moments in his life worth holding on to and including in your playlists.

“Releasing this amount of music is difficult and vulnerable for me. I’ve been too afraid to release it for years now. I’m relieved that God gave me the courage to do it. It means I don’t have to be ashamed of anything I’ve created,” Stephen admits while also encouraging music fans everywhere to give his music a chance.