New York based rapper and producer Jak Frawst positively embraces the challenges he’s faced while on the journey to success in his newest release “Gotta Make It,” off his upcoming EP TRIALS AND TRIUMPHS.

“Gotta Make It” honestly dives into the obstacles he’s had to deal with while chasing his dreams. Just as the title suggests, there’s no other way out of the difficulties in life – he has to make it. For every single person who’s shown him support and been by his side.

The slow jam comes after “Through Crystals Eyes,” which captured the attention of Domestic Violence survivors all over the country with press and radio coverage from various outlets. “I find inspiration in everything I experience in life. I thank everybody in my old neighborhood and all the talented Dj’s around the world for their continued support,” Jak Frawst said.

Enjoy the release of “Gotta Make It,” currently available on Tidal, Amazon and other streaming sites while TRIALS AND TRIUMPHS drops this late October/ early November. 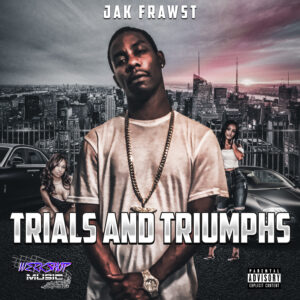 See also  My Autumn Amor ft. Yuki Noda - "Your Life is a Song"