Heavily influenced by the bluesy hard rock music he grew up on, the 15-track album is an ode to the final moments shared together with his terminally ill mother during the last year of her life. Playing the guitar is one of the few ways he found he could honor his mother while telling stories in a captivating way that hasn’t been done before.

His passion for playing the guitar transpired into a meditative and soul-searching collection of guitar-led compositions not only diving deeper into his personal experiences but also his love of literature and increasing curiosity on the human condition. Hodgson is excited to share this masterpiece with the world as he takes pride in how the simple use of the guitar helps him construct tracks that further inspire his listeners without the necessity of a human voice.

Congratulations on the release! What can you tell us about the album Apparitions?

“Well, the title comes from my Mum’s favourite poem ‘Apparitions’ by W.B. Yeats. And the line from it “Fifteen apparitions have I seen’, gave me the number of tracks that I decided to write for it. The making of the album came during a very reflective period of my life, I was at a bit of a crossroads, and I began revisiting my past and deriving inspiration from it. It became other-worldly at times and the tracks almost seem to write themselves.

The overarching theme to the album is about how nothing ever stays the same and everything changes or decays. Lives are lived, and love is lost, but looking forward is the thing we can all do. No matter what people say, we all have regrets, but hope and optimism are usually only around the next corner. So it’s conceptual in many ways, and even though there are no lyrics, there were real themes and deep thought behind each track. I let the music go where it wanted, and I allowed myself to explore styles I hadn’t recorded before and really pushed the boundaries of where I could go musically. I played with total freedom and I was scared of nothing.” 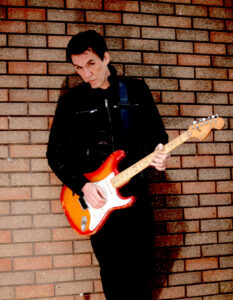 The music video puts a spin on a dazy night where it feels like there’s only one person in the room and nobody else can capture your attention. Joe Hodgson finds himself at the center of the room with his guitar ruminating on the unsaid emotions found within this evocative atmosphere.

“With Serena Sonata, I wanted to show myself actually playing the song in a live situation, but with a little twist in that, it came in the form of a dream-like sequence. We shot that in a club in Northern Ireland over two days and got an actress in to play Serena. So with a little bit of trickery in the editing phase, we made it look like everyone in the club had dissolved and there was only myself and Serena left.

The story is of meeting someone and experiencing that crazy level of attraction, where it feels like there’s no one else in the room. It’s also about the magical qualities music can possess and how it can get to us and influence us at the deepest emotional level. I left the director and editor, John Twohig, total freedom creatively with that video and just concentrated on trying to perform.”

The animated music video shows the power of neglecting the underdog just because of appearances. As a central theme in Joe’s album, his desire to display how breaking free from societal norms is evident in this single’s visuals. He takes the little guy and turns him into a powerful force to be reckoned with as guests move away in intimidation of the transformation they’re witnessing with their own eyes.

“I always wanted to do an animated video and “Bareback Blues” seemed perfect for it. When I was recording the track I always imagined we were playing in a bar in Texas. I wanted to tell the story of the little guy in life and why you should never underestimate him. I named him ‘Hank’ after the real-life and now sadly departed “Hank The Angry Drunken Dwarf” who used to appear regularly on the Howard Stern show. So I scripted the video and sent it to a Greek animator and he replicated exactly what I wanted. I was delighted with how it turned out.”

“The One That Got Away” sonically finds its footing through the use of his guitar to tell the story of a sudden break up of a long term relationship that left a mark on him. The sounds shift from an uptempo acoustic vibe to an unexpected electric guitar keeping listeners on their toes the entire time. Not only do we get to hear the melodic sounds, but he also released an accompanying music video which details the compelling story of a breakup and being trapped in a cycle of regret, as the protagonist sees a video of his mistakes played back to him, in what amounts to a video within a video.

“For ‘The One That Got Away’, I wanted to recreate the story of the relationship break-up that inspired the track, while also retaining some kind of presence for myself in the video. So I got two actors to take care of the story and just had myself popping up on the screen now and again, to remind people it was a music video. My appearance and the captions we used was a little play on the title itself and that added another little angle to it. For this video, I had a young Australian filmmaker Sam Napier-Hill create the storyboard and I got a Dutch director, Diego Calderon Jansen, to shoot it. We filmed that in Northern Ireland, then sent the footage to Australia where Sam edited it.”

Aside from these main releases, Apparitions is jam-packed with singles perfect for the guitar-aficionados to the everyday person looking for a new album to inspire them through life. Apparitions flow from the harmonic opener “Cantata 147,” to the funk-infused rock “Fly Your Flag,” to the delicate, mournful “Till The Last Breath,” to the fusion inspired “Resurrection Dance,” to the fast and furious“Disruptor,” before the album’s final smoke-filled, jazzy-blues “Losing You Again.”

Listeners will be taken through an intense journey of finding oneself, meeting people who have long-lasting impacts, and realizing that one has the power to remove themselves from what’s deemed part of a functional society. The deep intensity found within the blend of musical genres is just one thing to look forward to from this album. Hodgson is a versatile guitarist who is beating to the beat of his guitar to connect with music lovers from all over the world.

Which track was your favorite to produce and why?

“That’s a very difficult question because I loved producing them all. The most memorable and the most challenging was “Running Away From Me” because I recorded the guitars for that the day after my mother was buried. I had to drag myself into the studio and force myself to work, and I can really hear the pain coming through in the lead guitar in the verses. But curiously it’s quite a joyous track, I wanted it to sound like Maroon 5 meets Santana in a dark alley. God knows if that’s what it sounds like to anyone else though.”

Apparitions will be available on Friday, November 27th along with the release of his documentary “Who the **** is Joe Hodgson?” capturing his journey as a guitarist navigating his way through the difficulties of life with the use of his guitar.