Interview: Justin Smith Proves Not Giving Up Pays Off In The End As “There For You” Reaches New Heights

As an artist, Justin Smith’s ability to turn poetry into songs has become a way for him to connect with his fans on a personal level. 2019 was just the start for Smith, who released 5 new singles including his top hit, “There For You.”

With his fanbase growing at a rapid speed, get to know Justin Smith as we discuss his journey, inspirations, and upcoming singles and EP!

“There For You” is one of your most popular releases in 2019! How has this single shaped your music career?

I think “There For You” really helped me find out who my target audience is and really helped me start to find my sound. Although I will admit I think we may have gone a little heavy on the autotune it seemed to still go over well with my fans. It was also my first and only song to go over 100,000 streams on Spotify. It has really paved the way and built up momentum for my future releases to be successful.

Do you have any plans on creating music videos for any of your released singles?

I don’t plan on releasing a video for any of my released singles other than the ones I already have on my YouTube however I do plan on releasing some sort of video for every single I release in the future whether that be a music video or a lyric video or just an audio visualizer of some sort. The video for “Fantasy” is doing great right now. It has almost 120,000 views on YouTube and Facebook combined.

What’s the inspiration behind “Fantasy”?

That’s kind of a hard question to answer because it’s a song that is kind of fiction and kind of non-fiction. Most of what I’m talking about is stuff I’ve actually been through and some of it is storytelling and being an artist. That’s one thing I love about making music. It can be whatever it is that I want it to be.

You started writing poetry at the age of 14, how did that inspire you to start songwriting and releasing your own music?

I don’t think it was poetry that inspired me to start songwriting and releasing music to be honest. What inspired me to start making music was watching a documentary called “The Carter” which is about Lil Wayne when I was 18. I was mesmerized by how Wayne was able to record and release so much music without ever writing anything down. The night I watched that movie I started recording “songs” on my phone over Lil Wayne and Drake beats. I’ve been working on perfecting my craft ever since.

Which one of your releases is your favorite and why?

See also  Daniel Tortoledo - "Through out These Years"

Right now “Fantasy” is my favorite of all my releases. It is the song that best depicts who I am as an artist. I love making “real” heartfelt and emotional music. I love making music that a lot of people can relate to on a personal level. Death, heartbreak, drug addiction when you make music about those things you touch people on a certain level that other things just can’t.

It took you some time to get back into the music. How did your experiences before 2019 affect your journey as an artist?

My experiences before 2019 were everything to my journey as an artist. I was really down and out before that because in 2017 I got caught with 72 weed plants. As a result off that I was placed on house arrest from July 3rd 2018 until December 28th of the same year. It was costing me $1,000+ per month to be on house arrest and I was working at a job where I was barely even make enough to cover that per month. My bills went unpaid. My house went into foreclosure (yes I own my own home) but I still needed to make sure I was doing something for my music so I invested in a few online courses in facebook and instagram ads and those have really been the key to taking my fan base to the next level.

With help from my mom and my girlfriend as well as getting a better job I was able to get my house out of foreclosure and get all my bills caught up. I could have given up but I never did. I fought through the adversity and kept making progress even if it was slow progress. Slow progress beats no progress any day of the week.

What influenced you to pursue music? When did you feel inspired to start sharing your music with the world?

As I said earlier the movie “The Carter” influenced me to pursue music at age 18 but it wasn’t until I was about 22 or 23 that I actually started sharing my music with the world. I released a few songs on Reverbnation around 2013 and thats when I realized I was onto something however family issues and legal issues shut down any chances I had to chase my dreams at that point in my life. Not giving up is a key part of my journey and so far it’s paying off. 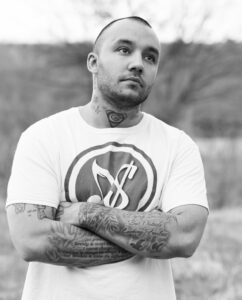 I want my listeners to feel like they’re not alone in the world with their problems. I want them to turn on a Justin Smith song a be able to relate with the trials and tribulations I’m rapping or singing about. I also want them to feel inspired to make changes in their lives and hold themselves more accountable to make those changes and not make excuses.

Your merch is pretty cool! What inspired you to come up with the idea to sell clothes based on your songs?

Thank you! I really just came up with the idea based on what I saw was working for other artists. Merch has always been something I’ve wanted to do and now with my music starting to gain momentum its looking like I’ll finally get to do it. It feels surreal seeing people wearing clothes with my logo and artwork on them! – To purchase your own, check out his official website!

Fantasy hoodies are now available on my website! ⠀ ⠀ Whether you're a fan of my music, my motivational posts or both I appreciate you and your support more than you could ever imagine! ⠀ ⠀ Hit the link in my bio to check out the website and grab your hoodie!

I don’t have any huge goals for this year except to keep building on the momentum I already have going for me. I’d really like to do over a million streams this year as I’m sure every other artist would but for right now I’m just focused on building my brand, doubling my fanbase and feeding that fanbase with great music and content on a consistent basis.  This year I plan on releasing 3 or 4 singles as well as an EP so be on the lookout for that!