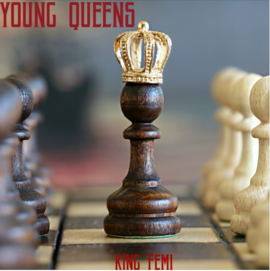 “Young Queens” comes after releasing the energetic single “Rolex.” This song is a slowed-down trap song with a smooth flow over the quick moving beats. Although the song moves slower than typical trap songs, “Young Queens” represents all the trap elements found in the 21th century with its saucy hi hats and clashes, and 808s that keep listeners interested from start to finish.

King Femi has unique vocals throughout the song as he spreads the message “stop playing young queens.” As the song progresses, the slurred vocals and coherent lyrics mesh with the quick moving beats in the background. The chorus is impressive as the pitch range varies in a short boosts, making it different and engaging.

That’s part of the fun of this project, right? Twisting your voice into new shapes to give your song a deeper depth than what’s currently playing on people’s headphones.

The single was released independently via his own label, Royal Family Productions, LLC. Fans who regularly listen to Gucci Mane, T.I., Future or Migos will be satisfied with this track.

If you’re looking for a rare kind of artist who thrives on versatility in his songs and uniqueness in the trap game, stay tuned for his upcoming release “Downtown,” available on November 29.