Singer, professor, and musician, La Bek, showcases her powerful voice in what’s now her fourth album release, With You/For You. The leading single “Hold On,” originally written by Sonya Rae Taylor, shares an outcry of social injustice in the world and how we can overcome it by being there for each other.

With You/For You includes original compositions, Blues and her own spin on very popular classics. This new album has a little something for everyone! “Hold On” is just a sneak peek of how captivating La Bek is when it comes to the interpretation and arrangements of the music on this release.

Apart from being a faculty member at the Berklee College of Music, La Bek has fully leaped into her passion for storytelling and music by releasing her own musical creations. As her fourth album release, With You/For You, is a vulnerable, loving, and caring work of art filled with stories meant to inspire and bring joy to every listener in the world. Her multiple recordings Love at Last 2004, Burgundy Brew 2011, What a Woman Knows 2015, and With You/ For You 2019 can reviewed on her website Labekmusic.com.

Once La Bek (AKA Rebecca Malka Perricone) received a full scholarship to Cornell University and graduated with an MFA, she moved to New York City where she pursued a performance career and starred in repertory plays, appeared in television and on Broadway. 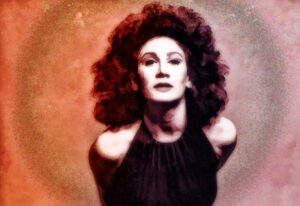 Perfecting one’s career in music takes many years of perseverance and creativity. La Bek has developed her craft while producing and bringing all her knowledge into words that solidify her life experiences as an artist full of wisdom to share.

Make sure to listen below to the full album With You/For You and find the one that speaks to you most. We’re certain you’ll find more than one in the blend of original music and classics we can’t forget.

The music video for “Hold On” displays various moments where someone may feel alone. La Bek shines a glimmer of hope as she lets them know everything will be okay. Keep holding on to all the important moments in your life and you’ll be able to surpass any difficulties you’re currently dealing with in your life.

“You know we can feel it/ It’s together we can heal it/ We’ve got to hold on,” La Bek sings as a small piece of encouragement.

With the goal of creating music that promotes joy and healing, listeners can find themselves connecting with the words and various feelings of “I can do this” while listening to her music releases.

“Hold On” shows people such as army veterans, families, and support groups uniting to be there for one another with calm, mesmerizing sounds of the piano playing in the background.

“The most vulnerable and sustaining part of expression is when we put the depth of understanding into our voice, seeking communion with the music and the moment we’re living.” La Bek mentions on the importance of music and the act of simply being there for one another.

When you’re feeling down and like there’s so much going wrong in the world, remember this: “together we have to hold on.”