Luca Mercandino, well known as his musical name Luca V, is an Italian singer-songwriter discovering his own capabilities within the increasingly popular Pop and Rap music genres. His desire to create music that influences listeners to continue living their lives to the fullest while finding their inner happiness is an influential factor in his decision to share his music with the world.

Music is a way that many people can come together through a newfound common interest that unites people regardless of where they are in the world. He finds music as a way of effectively expressing himself as well as finding himself when he mirrors who he is through other people’s songs. 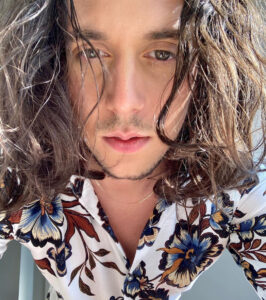 Luca V thrives on the authentic emotions shared in his songs and music videos, which have gained over 100,000 views since all the video releases dropped this year. His deepest thoughts find their way from his inner ideas into musically driven compositions that take the listeners to another world while reminiscing on distant memories in their own lives.

Born in 1995 in Turin, Italy, began his musical journey in 2019 where he now resides in Milan, Italy. While being receptive to the musical influences around him, he started writing his own lyrics that would later on become creative compositions filled with cinematic melodies and immersive visuals.

His previous releases “Forse” and “TRIP” have quickly gained over 100,000 views on Youtube within their first year. The debut single “Forse” speaks about completely accepting himself and what he has to offer the world while realizing that sometimes it’s okay to disappear for a while to discover who you truly are. In the music video he depicts the nurturing desire to take care of someone very important to him. In a way, he’s taking care of himself and what he needs from himself to continue being the kind of person he wants to become.

“Forse” finds itself running on the rhythmic sounds of the guitar and drums coming together flawlessly to bring us an upbeat and exciting new single that we can replay over and over again. “Loving yourself, your thoughts and your “other” self is always the key,” Luca V said.

His experimentations with his music have allowed him to fully express himself through introspective lyrics blending with balanced sounds only a creative individual could possibly place together to create music that makes a difference. When it comes to musical inspiration, he relies on the power of musical genres pop-rock, progressive rock, tropical house blues, indie, and lo-fi as well as Italian artists such as RIKI, Emanuele Aloia, Fedez, Ultimo, Mr.Rain, Random, Mose, Negramaro, and his friend Lorenzo Avanzig to inspire him.

The second release “TRIP” mesmerizes viewers as they are taken through a psychedelic trip through what seems to be his deepest desires. He describes the commonality felt throughout the world when it comes to having feelings of love for someone yet being placed in the friendzone. He shows the turmoil of these two differing ideas in an interesting way that display his creative abilities put to work.

He mentions, “Sometimes the reality goes in a sort of mental “crash” and you simply have to “reset” to be able to see the reality for what it is.” He understands what it’s like to want to push ourselves in order to accomplish goals but the real success comes in when we take a minute to step back and visualize how far you’ve actually come since you started.

Determined to create music that speaks to whoever listens, Luca V is going to continue to strive for perfection when it comes to his music. One year ago he just got started putting his thoughts into songs and a year later his songs are making their way into people’s playlists.

2021 is going to be an exciting year for Luca V as he’ll be releasing a new single titled “Filofobia”! The single will discuss the emotional feelings of being afraid of having a large amount of love for someone else. The sound is driven by a dark, moody with Carolina Rimoldi singing the hook, which touches upon the contrasting emotions he describes. She positively embodies how powerful love can be and encourages listeners to follow their hearts and not the fear associated with love.

The single creates an influence on the idea of the term Philophobia, which is described as “the fear of love or of becoming emotionally connected with another person. It shares many of the same traits as other specific phobias, particularly those that are social in nature.”

Luca V is thinking outside of the box as seen in the visuals for his previous releases. He doesn’t rely on the usual characteristics that have made other artists well known, instead he’s paving his own way to connect with past and future listeners all over the world. His music will continue to find fans when they least expect it.

Stay tuned for the upcoming new music coming from Luca V, who will be leaving listeners with a newfound love for Italian music that leaves a long lasting impression. The following year will be full of new surprises that you won’t want to miss! Follow Luca V on his official website and Instagram to find out more about his upcoming releases!