Mass House Is Set To Release “Birmingham” On May 15

Mass House dives into 2020 with the release of their newest single titled “Birmingham,” which will be available on all streaming platforms on May 15!

Infused with eerie beats and plastic synths, lifelong best friends Dylan Williams and Tom Minchin, use music as a way of exploring their heritage and diverse collection of personalities in Birmingham. Their blend of Electronic Indie, Alt Pop, and Synth Pop sounds entertain listeners and live audience members with fun performances that incline fans to bob their heads and move their bodies along with each beat.

“Birmingham” describes a struggle between being suffocated by their surroundings and the “Stockholm syndrome” they feel towards Birmingham’s streets. Mass House discusses the imposing brutalist powers in their city as they struggle to find safety in their society. 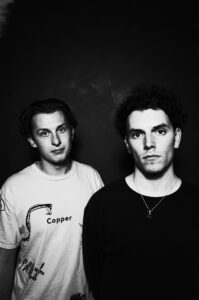 There will be a DIY music video released following the the release of “Birmingham” for viewers to see their viewpoint of the life they’re living. It’ll definitely be something you won’t want to miss!

2020 is looking bright for Mass House, who will be releasing new music all year long as they continue crafting their music while in quarantine.