Los Angeles based synth pop band, The Sometimes Island, releases “Phantom Limb” to dicuss the addictive state of being in a relationship headed towards a fall.

“Our love for someone often chains us to situations that crash, except the crash comes in waves, and the highs of the waves blind us to the ever-lowering lows, to the trend towards destruction that neither party can ever change,” frontman Matt Blankenship Jr. shares.

Before COVID struck the music industry in a tremendous way, The Sometimes Island was heavily known for their unforgettable live shows. To keep up with their series of livestream concerts on Instagram every Thursday at 5pm PDT.

“Phantom Limb” is the latest music available from the band with the name symbolically called after a lake island in Austin where Matt Blankenship Jr. grew up. It symbolizes how the water level on the island is either emerging from the surface, or submerged and hidden.

As the first release of a series of music releases coming your way, we are presented with a music video for the single. The video displays an enchanting musician singing on a mic while his arms seemingly floats around him in a comedic style.

It’s fairly easy for one to get addicted to the recurring emotions of being in a relationship, yet knowing when it’s nearing the end is a difficult task. Matt Blankenship Jr. wrote this song for a different artist before realizing how well his fans reacted to them performing the track on tour.

“Telling you the ending/ Would that make it easier?/ Cuz the silence never tells me where to stop/ I could tell you where it ends/ My phantom limb” he sings to an upbeat sound of drums and guitars creating an inventive, quirky instrumental beat that gets listeners off their feet and dancing along with him. 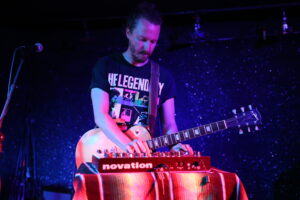 In terms of interpersonal relationships, addiction to one another in a codependent style will always lead a dismay. The phantom limb is in our perspective about losing something that you believe should be attached to you but in reality is haunting you to see the truth of this phantom limb.

The limb is taunting him in the music video, as if there is no hope for the body part to eventually set sail on the lost and confused body. It’s an intriguing way of displaying how the loss of something you believe is detrimental to you may not actually be the most important thing to try to fight for because there might be something better along the way.

“Most of us have been in relationships that have derailed, and there was every opportunity to jump off the train before it crashed,” Blankenship Jr. explains. “Our love for someone often chains us to situations that crash, except the crash comes in waves, and the highs of the waves blind us to the ever-lowering lows, to the trend towards destruction that neither party can ever change.”

Without knowing when live concerts will be back in action, The Sometimes Island have set out to continue to stream a series of livestream concerts on Instagram every Thursday at 5pm PDT. Check out their sets next Thursday!!