California-based artist Noah Wolf is paving his own path with a strong blend of R&B and Pop music carved into his releases that are only getting better and better as time goes by.

His previous release No Feelings 2 is now getting an upgrade with the final installment of the No Feelings series getting its very own part very soon. The first installment was released in 2016 and the second one in 2018. No Feelings 3 will be the final part of the series closing out a journey of self-discovery, love, drugs, relationships, and fighting through the hardships in life.

The nine-track album challenges the way he’s been viewing life through the real-life experiences he has dealt with. He remains consistent with a synth-powered production, slow-tempo beats, and honest lyrics identifying what it is he wants in life and going after it. If you’re looking for a new laid back album to add to your playlists, check out No Feelings 2 and stay tuned for the release of No Feelings 3!

Noah Wolf is an unforgettable artist and he knows it. He gives it his all with every single release he drops, such as the latest 2020 single “Losing Both.” The single displays how he takes back his power from people who were trying to use him while creating a Trap meets Pop style with light instrumentals allowing his Juice Wrld-inspired vocal range to shine against the smooth production.

“A lot of my fans are day ones that told their friends about me and it just continued and continued,” Noah Wolf shares. “So to me personally I want them to be able to say, “I told you so” to the people they tried to show my music to and wouldn’t give it a chance cause it wasn’t that gang stuff they’re used to.”

Inspired by the real-world experiences he encounters, Wolf takes the initiative in creating those moments into conceptualized songs that other people can relate to when they listen to him for the first time. With COVID placing restrictions on the usual night outings he was used to, he finds comfort in sitting down and trying to allow the words to come to him when he starts creating new music.

The studio time is the most important component of the musical journey as he navigates new ways of staying inspired during these life-changing moments in history. “ALLMYDOG$$” will be the first single available since the release of the only single available from this year, “Losing Both.”

Stay tuned for the release of No Feelings 3 closing out the talented artists’ series depicting his journey through life in an intriguing project that will further inspire you to follow your purpose. 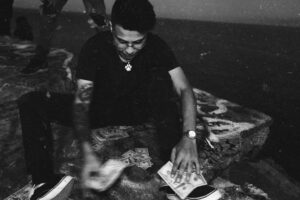