Nobody from Jersey, a Rock/Alternative duo from Old Bridge, New Jersey, are prodigious in their debut self-titled album.

The pair have been working together since 2017 when they united as songwriters to record, perform, and independently release their music. The debut album, Nobody From Jersey, is just one piece of their effort to become well-established artists.

Button Down Shirt” kicks things off with a guitar-led jam that rises to a powerful climax. It’s a great start, and its playful lyrics and head-bobbing beat are instantly charming.

“Surf Green” is a fast paced Rock track that keeps things moving. Self-described as, “Everlong’s upbeat brother,” the track has some of the best writing on the album and a memorable hook. “Frozen” goes on to showcase their Motown skills with some slick, groovy bass work and cutting guitar work. The boys give it their all on this song with an extended instrumental section and big finish.

Surprisingly, “Get Well Soon, Shitbricks” lives up to its name as a fun, high energy track with a punky guitar riff that that growls through a story of yeses and noes.

“Morrows” slows things with a collection of sweet revelations just before “Be Sassy” cuts in with a danceable beat to start the party back up. The salient narrative of a feverish night out is another lyrical highlight.

“Dark and Stormy” sounds just like its title. Towering drums take charge while dark, moody vocals paint a portrait of melancholy that resolves to an intense cavalcade of instrumentation. As the only Blues track on the album, “Et. Al” tells the tale of the sidepiece. It’s a catchy Open Mic Night song to get a crowd moving.

“You’re Not Entirely Sure” keeps things burning with punchy drums and guitar riffs in an honest, boneheaded rock track about clashing personalities. It’s mean. Sounds like theme music for punching your childhood bully.

The second to last song, “The Color Blue,” opens to the sounds of the beach and the crash of waves, a soothing change after the brashness of the previous track. The song tells a story of love as a tether to better things. It’s sweet and light. A must-listen.

Finishing off the album is the indelible “00,” which bleeds inspiration from the James Bond themes of the past. Its climactic and cinematic beats are unpredictable but maintain serious charisma. Makes me want a martini. 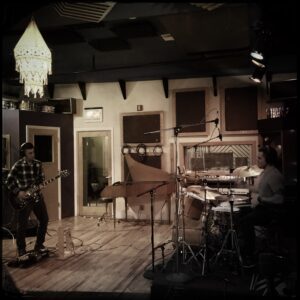 If I’m any indication, listeners will invariably want to call the tracks on Nobody from Jersey their own. The in-depth storytelling, clever instrumentation, and diverse melodic sound deliver a unique but familiar characteristic that those who appreciate artists like Arctic Monkeys will gravitate to easily. Check out the album right here and keep up with Nobody From Jersey on social media!