Songwriting siblings Perfect Soul have announced their debut EP Lost The Love – Presented as an introduction into their pop-driven sound through four brand new tracks. With title track “Lost The Love” having already premiered on BBC Introducing in the West and Bristol’s BCfm Radio, the EP explores different styles, from soulful pop ballad “Adore Me”, to the contemporary R&B influenced “We Tried”. Lost The Love is the ideal showcase of Chelsea’s powerful vocal ability, combined with her brother Sam’s songwriting and production.

“I’m super excited to be releasing some new original music again,” Chelsea explains. “We’ve been playing gigs every month for the past two years and haven’t released anything new for a while, cannot wait to hear the response”.

“I wanted to put something together we could both be proud of,” Sam added. “We started writing this EP December last year, hopefully more opportunities can come from this, we would love to grow our fanbase and continue recording and performing more songs people can enjoy”.

Originally from Bristol, Perfect Soul started as a covers band, performing at various restaurants, weddings, and private parties throughout South-West England. With an interest to grow more listeners through their pop-driven sound, the band began to focus more on their songwriting and original material.

Growing up Chelsea and Sam would frequently write and record songs together. Before the duo was formed, the two had worked on various songwriting projects. In 2014 they released their first early singles, this included “Believe Me”, which received support from BBC Introducing in the West and local radio stations. 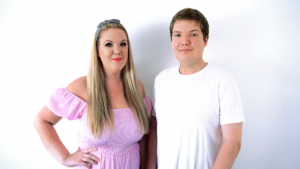