Playfio releases the newest music video for “Isolation,” one must-hear track on their second studio album, Arcadian Resonance. The creativity for “Isolation” comes after being triggered by a variety of events in his life that sparked him to take action and put his thoughts into words.

Written by Rob Playford with Claude Etienne on the guitar and Adam Titmuss as the master engineer, “Isolation” quickly makes listeners feel like they’re also in this world of solitude and analyzing what will be their next step in life. While being in isolation sounds unappealing, it can be a time of self discovery for many who long to see what’s beyond their small world. 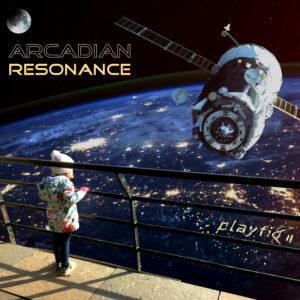 Music producer Rob Playford shines in Playfio as he manages to create music that makes listeners feel every emotion we have while unlocking our imagination to create our own stories relevant to what they’ve released. This new single depicts a journey of returning to a place that was once called home, whether it be a person, place or thing.

“I’d like to know, which way to go/ Which way to look, beyond this show/ If only one, can listen in, and look beyond the state I’m in,” he intriguely sings to an upbeat futuristic sound that gives attention to details surrounding each sound, visual, and emotion behind his words.

The music video is set in another dimension where two different beings meet once again many years into the future while trying to re-visit the old shell of earth that their ancestors used to call home. Their journey towards earth doesn’t go exactly as planned but that’s always the beauty of life – finding your way through the difficult times and enjoying the moment of bliss once you reach your destination.

Speaking on the effect music has had in his life, Playfio said: “Making music is something very special to me and I can never see a time when I won’t enjoy the magic of producing an entirely new piece of music from a spark of inspiration and seeing what it might turn into.”

As one of the first few releases from the album Arcadian Resonance available to the public, “Isolation” triggers a spark in listeners to follow the unknown and go in search of what makes their hearts melt. In a literal sense, it’s when in isolation that we find ourselves once again and are able to pursue what matters the most to us.

Stay tuned for more music coming your way since Playfio will be releasing new music videos every single Friday for the next three and a half months! Find the videos under the hashtag #ONEaWEEK, which includes a total of 16 videos.

Playfio is a hidden gem within the progressive rock that is making a difference in the musical genre with their songs. Mark your calendars, Arcadian Resonance will be available this upcoming August 20th!