DopeAMean (Josephis Wade) releases his debut album Blue Faces through his record label Every-Thing Dope LLC with “Too Much Sauce” as a separate amped up single everyone should hear to learn more about this talented rap artist.

Josephis Wade, musically known as DopeAMean, is a Rap artist living in Denver, CO. As his interests in music, technology, and entrepreneurship guided him to create new businesses and special projects, Blue Faces is part of the legacy he’s going to leave behind one day.

His start in music goes back to when he began rapping in 2004 with a rap group formerly known as Y.B.E. (Young Black Entrepreneurs). This solidified his love for creating art through his music and being able to fully express himself with his words. The result of that is Blue Faces, a 14-track album pulling apart everything he’s experienced, felt and dreams of accomplishing.

Speaking on the album, DopeAMean said: “It’s an album that I feel represents different stages of my life. The album was totally spontaneous but it all came together as if I had planed it. Blue Faces was just a metaphor for change.” 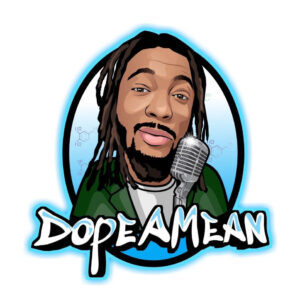 Blue Faces represents a time when DopeAMean was facing homelessness and prejudices after being discharged from the U.S. Army, which he served on one tour of duty in Afghanistan. After enlisting in the US Army in 2009, he returned feelig as though he had grown and developed both as a person and artist.

“I’m me, none of the extra. No lingo to make me look cooler than I am. No dressing to impress anyone but my self,” DopeAMean said.

He continues, “Life is too short and I’m here to have fun and improve the lives of others. In my journey to develop as an artist, one of the things I find to be most important is reaching back to help others. I’m far from perfect but that doesn’t stop me from attempting to reach the mark.”

The single “Too Much Sauce” is the perfect hype song whenever you need a boost. DopeAMean sounds fresh and original with the verses included in this song. Its upbeat with gentle baritone vocals catch our attention instantly as the beats intensify and leave us waiting for more from him.

The first track of Blue Faces, “Stunner-Man” sets the tone of the entire album right away. DopeAMean’s charismatic and fun vocals shine against the hyped-up sounds in the background before paving the way for the album highlight, “Gucci Bag Shawty.”

“Gucci-Bag Shawty” puts DopeAMean in the spotlight as he and Super Kool’in show off their natural rapping skills in this hot track. They stay real about living their high life with women surrounding them, an expensive lifestyle and going to all the lavish parties. This is the single to blast in your car while driving down a busy road and getting everyone on the DopeAMean wave.

“Diss How It Is,” “I’m All That” and “Money Don’t Fold Up” features rapper Weather FNG who brings his own incredible  verses to the track. Together they throw out the realest bars on the mic with catchy, fast-paced beats any Hip Hop/Rap fan can vibe to in their house.

“Coner Store” describes the life of the hustlers, those who stay on their grind trying to make their life happen somehow. This track gives off major 50 Cent vibes with the range of captivating beats, smooth vocals, and personal message of staying on top of your goals and doing what you need to do to succeed.

Titled after the full length album, “Blue Faces” disses people who are hating on his success with a simple drop of impressive synths and drums in the background. “Bout My Money” trails along with a similar message about chasing your bag. He’s not stopping for anyone and will contiue to keep on chasing his rap dreams regardless of what anyone has to say.

“Catch Me In Da Trap” is catchy as hell! Reminiscent of one of Future’s earliest songs, DopeAMean lets you know where you can find him once you catch up to his level. The switch up in vocals with rapper TankHead Wreckin opens up a memorable three minutes from the other tracks.

“Bart Simpson” is one of those songs you don’t want to end. It pulls listeners in with their relatable lyrics about everyone’s favorite fictional character Bart SImpson and beats. The united front on this single take turns leaving their thoughts one after another. On the flip side, “RubberBanz” is the track you can bring to the party and get everyone bobbing their heads along. DopeAMean is in his own rap tunnel as he spits bars alongside rapper Ray Gunner.

Produced right after returning from Afghanistan, “I Can Do Whatever” has a different feel to it. He’s determinmed to do the things he wants to do, especially after coming back from a four year tour. As a slower track on the album, each verse delivers a thoughtful look on the world and what he wants to accomplish.

“Inside Of My Roof Gone” is a lively track with a confident DopeAMean behind the verses featuring Weather FNG and Blizzard. They create insightful and descriptive bars of their prospering lives while continuing to spit relentlessly along with the memorable hyped up background beats. This song is unlike any other on the album!

As the perfect ending to the album, “Ambition” marks his transition as an upcoming rapper into DopeAMean. It’s based on his move from Georgia to Colorado and finding a way to stay ambitious with his goals while getting rid of his comfort zones. The single is sincere and motivating to everyone who listens to his life story.

Blue Faces is a collection of fiery tracks that show DopeAMean at his best when he has the mic to himself. He’s skilled in a variety of songwriting, musical interpretations and ways that can greatly be imrpoved with more time dedicated to the craft. Blue Faces is a journey and his legacy is just getting started.