Alternative artist, Rios, surprises fans with a new song that listeners of all musical genres will surely appreciate. In the latest release “I’ll See My Baby Again,” he takes on the mission of spreading his modern take on the traditional American murder ballads and creating it into something of his own.

Based in Miami, FL, Rios sees music as a creative outlet that allows people to express themselves while dealing with everything else going on in the world. His appreciation for musical sounds, uniquely artistic creations, and expressive individuality are notable in his newest single release “I’ll See My Baby Again.”

His special talent consists of playing every single instrument that appears in his songs to help him forge a connection between today’s modern music and the traditional American Western sound we’re not accustomed to hearing these days. It’s eccentric components doesn’t leave listeners feeling like they can’t enjoy the song after listening for the first time. 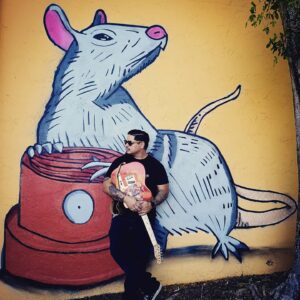 He achieves a distinctive sound by switching the focus of the traditional American murder ballad into a contemporary western scenario that turns heads and keeps listeners hooked to every word he has to say. His ability to turn it into something new and exciting is incredible to see as the final product is unexpectedly remarkable and worthy of more than one listen.

The introduction in “I’ll See My Baby Again” is filled with fun twangy guitars that instantly gets listeners in a happy mood yet feeling prepared to hear the somber lyrics. It’s a relatively balanced single filled with content musical vibes but also a bundle of regretful lyricism.

Throughout the song, he details a tragic love story jam-packed with themes found in western movies such as heartbreak, deception, and violence. These themes make the song and themes relatable to those who listen.

“I’ll See My Baby Again” flows just right from the very start to the end. It’s actually difficult to think of anything else but dancing along to the range of entertaining beats when the sounds begin to play and his calming, youthful vocals spread his longing message about love.

His natural sense of storytelling while taking one story and turning it into something mesmerizing is captivating. Make sure to keep up with him online to see his future releases first!

Join Rios on a trip out of this world and into a Western love story you won’t want to miss out on. “I’ll See My Baby Again” is an extraordinary example of a remastered perspective that simply works. The new single is now available on all streaming platforms!

Did Rios’ modern take on the traditional American murder ballads resonate with you all listening at home? Let us know your thoughts in the comment down below!