Expectations are high with the anticipation of the release of the new album from Sweden-based artist and songwriter Johan Ruborg who’s set to release his newest album Villain of the Piece this upcoming October 1st. He spectacularly remains inspired by his love for roots rock, which blends an intriguing mix of Folk, Blues and Country music for a variety of listeners from all over the world to enjoy.

His honest and authentic new singles display his meticulous approach towards his signature musical sounds and relatable lyricisms. It’s the authenticity of his raw vocals, poetic melodies, and resemblance to iconic songwriters such as Bruce Springsteen, Bob Dylan, Tom Petty and Warren Zevon that gives listeners an enjoyable experience from the very first song.

Villain of the Piece follows the impressive release of In It For The Long Haul, a 10-track album  that instantly feels like going on a long road trip with nothing but gentle acoustics, twangy guitars and powerful vocals leading the way for a peaceful drive. The emotive release displays Ruborgs’s versatility as he enters a defining space in discovering the meaning of life. 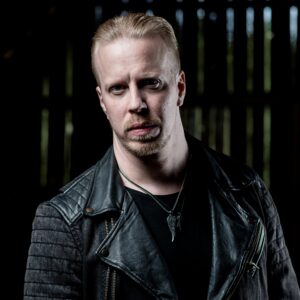 “I think I’m unique in the way that I try to integrate the old traditional rock music and storytelling with something new and fresh,” Ruborg says. “I’m not just another artist trying to emulate the big rock artists of the past.”

Johan Ruborg is a natural born storyteller who revitalizes guitar driven rock music and is currently on the cusp of a breakout year. Find out what attracts new listeners to this incredibly interesting musician on October 1st once Villain of the Piece is available on all streaming platforms! Enjoy the sounds of Johan Ruborg (vocals, guitar, harmonica), Johan Söfringsgård (guitar), Kristian Kveldstad (drums), Daniel Ruborg (bass), and David Petersson (keys)!

The new album starts off with the rowdy, upbeat track “You Made Me a Criminal” which channels his anger towards a situation without losing complete control. Emotions run high with powerful strings playing in the background. His mighty vocals draw us into the album as his old-school Rock sound keeps us bobbig our heads along to each beat.

“Join Hands” includes his signature blend of Folk and Rock sounds to create a mystifying blend of sounds that come together with his defining lyricism detailing the union of listeners coming together with people to build a supportive group of individuals in this seemingly dark world. He continues to pour positivity for everyone listening, especially during a time of solitude where people weren’t able to see their loved ones for a long period of time.

“When The Going Gets Tough” positively runs into what makes humans succeed in life once they let go of control and trust that things will work out when it seems like it’s not going to go anywhere. He sticks to a simple use of the guitar and drums to allow his vocals to capture our love for this signature blend of sounds.

“Hard Streets” picks up the pace for an intense yet soothing experience. The Rock sounds come together as he speaks of the hard times he experienced while growing up. It’s one of those tracks that you’ll hear while walking down the beach and getting in the mood for a chill and enjoyable time. This single is one of the few tracks that sounds like it’s giving us a live experience that we haven’t been able to experience for a majority of this year.

“I’d Rather Be Alone (If I can’t Be With You)” is the perfect slow jam with gentle rhythms merging with his sensible lyrics about being in love yet having to let that person go and being alone if the relationship doesn’t work out. His gentle approach towards this song doesn’t overwhelm listeners with overpowering sounds commonly used in Country based singles about these similar topics. Even the visuals give us a sense of freedom and tranquility as he strolls with his guitar along a lonely path trying to figure out his emotions.

As the first single released in anticipation of Villain of the Piece, “Blood Meridian” gives us a little taste of what Ruborg is capable of creating. He channels his roots in the Rock genre with unhurried sounds of guitars giving the single a solid feeling of calmness. This track prepares listeners for a alleviating collection of new songs that fit in with any occasion!

“We All Need A Plan” makes us feel like we’re flowing in a state of despair and happiness as we figure out what we want in life. He simmers down to discuss the overall premise of life which is having a plan for the things we want and chasing after our dreams. As he pours in the positivity into his listeners, the twangy guitars find themselves as a much-needed element in the song.

Finalizing the album is the feel-good single “Good Days Ahead” filled with positive lyricisms and a balanced range of confident vocals and quality sounds of the harmonica, drums and guitars. He appreciates the life he currently has while seeking out new adventures – it’s what life is all about!

“The characters in my songs are often displayed in difficult situations, down on luck and maybe with a less promising outcome than for the ‘average Joe’.” he admits. “Still there’s always some fighting spirit left in there, an underlying sense of faith and a small ounce of hope.”

Instead of following the masses, Ruborg integrates a minimalistic approach that gives his music a sense of freedom and genuinity that can’t be duplicated. He instinctively brings in the admiration of anyone who listens to his music as easily as just letting the music speak for itself. The new album Villain of the Piece is currently available for pre-order!