Holding in your emotions on something or someone your feel genuine feelings about is always going to feel heavy, like such a huge loss in your life.

Saudy Familia has just released a new song titled “Holding In,” expressing the idea of yearning yet not doing anything about it, alongside Costa Rican singer and musician Marifé.

“This composition explores the themes of love and longing,” he mentions on an Instagram post. “It speaks to the ones who have hesitated to pursue a love they desire. It’s about knowing what you want and allowing yourself to bask in the glory of love despite not knowing exactly what to say or how to say it.”

Saudy Familia is a Dominican-born composer, songwriter and drummer based in New York City. After emigrating to Washington Heights, he had tte opportunity of establishing himself as a muscian in Washington Heights Expeditionary Learning School (WHEELS) by becoming a Jazz and Latin Jazz drummer in the school band. The passion for music grew within him to the point where he pursued music professionally at the prestigious Berklee College of Music as a Composer and Arranger.

Following the many years of musical experience, Familia released his first full length album in 2016. Someone to Hold includes six songs introducing listeners to the classic Latin and Jazz sounds he grew identifying with and developing into his music. After a four year hiatus, he returns to us with new music to fall in love with this year!

His last single “Only You and Me” brings it back to the older sounds we grew up with, as a reminder for newer latino generations that music is in their blood. He blends elements of R&B, Salsa, Jazz and Latin Jazz to create his unique sound.

“Only You and Me” is Familia’s first Salsa composition telling the story of meeting the love of their life and embarking on a journey of beginning a romantic relationship. Featuring Rose Stoller on vocals, it would be difficult to tell that this is his first attempt at creating a Salsa based track.

My genre of salsa is not like others. I like to add instruments and patterns that you normally won’t hear on mainstream salsa. For example, on the piano, instead of playing montunos all the way through the song, I like to add Latin Jazz comping to make it more chill and full. A lot of syncopation is needed on the bass in my music and some where in the song, I need a back beat in the drums. It’s a must! Last but not least, I like to add a Triangle in the song to bounce around with all the Mambo bell patterns.

“Holding In” reflects back to the words left unsaid with a Carribean style inspiring us to dance along. Marifé’s vocals rooted in Jazz, R&B and Soul bring a unique flavor to the filled single with energetic rhythms and heartfelt lyrics/harmonies. It’s one of those songs that can last a lifetime as generations can grow older and older dancing to this hit on the dance floor at parties.

The heartfelt lyrics and stunning vocals from Marifé perfectly come together to share an overwhelming feeling of love, showcasing his talent as a writer and composer who’s just getting started. 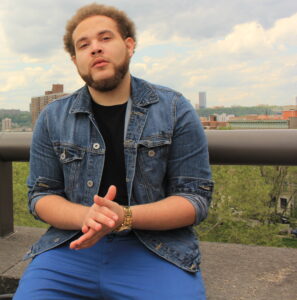 What does this single mean to you?

Half of this song I wrote in 2014. I was reflecting on how I used to always hold back on many things, and saying the things that I should be saying either to girls or people in general. So I wrote this song expressing and asking myself why was I that way. I also met some people who are like that, so I finished the song last year in hopes to release it soon. Now that it’s out, I know that many people will relate.

Every musician’s creative process is different. Familia mentions starting off the song as a R&B ballad then migrating the instruments to create his signature steady rhythm. “I double time the song so the instruments are double timed while the melody maintains a steady common time pulse. Then I add more spice to the sauce from there,” he said.

Following one’s passion can lead to amazing opportunities in life but the passion isn’t the only thing that will get one far in the industry. Saudy Familia recognizes the hard work and patience that it will take to go as far as he possibly can while connecting with listeners from all over the world.

Your time will come eventually. Don’t wait for others to call you and wait for opportunities. MAKE THE OPPORTUNITY YOURSELF. Lizzo became famous at 30!

Hoping to attract young American and Latino audiences with his music, he keeps a reminder to fuel our inner world with the  familiar rhythms and sounds of the Caribbean that inspire us to want to get up and dnace along to each rich element included.

At the moment I want to record a full album but it is very expensive, so I’m going to hold off on that at the moment. Hopefully release a couple more singles a long the way. My main thing is being active. I took a 4 year break after the release of my Jazz album so now it’s time to be proactive.

As Saudy Familia continues to release music that pulls at our heart strings, join along for the journey and find all his previous releases on all streaming platforms! Let us know your thoughts on the passionate release “Holding In”!