Each song on the album was written, recorded, mixed, and produced by Spurlin. The use of the guitar on the album makes every lyrics and verse stand out and hit listeners in the heart. Spurlin was clearly created with tons of love and a result of many life experiences that he wanted to share.

The album opens with “Means The World To Me,” a message to someone who has influenced him. “Your words come out so smoothly/ You are your own/ Your actions speak so loudly../ Even when it’s cloudy/ It shines your love/ And it means the world to me” he sings. The light use of the banjo brings a really cool transition from the use of the guitar.

In “June” he appreciates the life he had in the month and prepares to say goodbye until the following year. This is a fun track for listeners to dance to and reminisce their past month.

“In My Dreams” keeps a mellow tone as he discusses a failed relationship. His calming voice satisifes everything fans of would enjoy. This single is a great reminder to follow your dreams and pursue that person who you see a future with.

In “So Far..” Spurlin mentions how every experience he’s had has made him into the person he’s now. Regardless of everything he wouldn’t change. The song is accompanied with small breaks for the guitar to further bring on the sentiment of the song.

“More Road” is one of those songs that makes us feel like we’re crusing through a movie and experiecing life in slow motion. The single only uses the guitar to leave space for the lyrics and Spurlin’s vocals to shine. 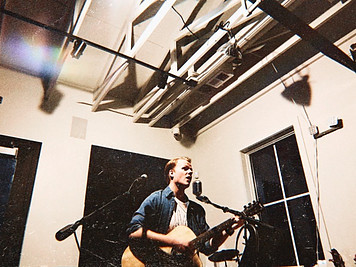 “It’s All For You” is a love song advising his love that everything he does is for them. With a country twist to it, it would definitely have been on the top country radio hits. Spurlin sounds incredible in this one as he serenades someone special with the lyrics “keep your head above the cloud/ the earth is dragging/ with your hands on the sky/ it’s all for you.”

“Somebody New” is one of the more upbeat songs on the album. Channeling Ed Sheeran vibes, this single is unapologetically Spurlin. As the single progresses he becomes more open about his life and “Somebody New” is an example of that. He’s open through it all and shares his love to the deepest extent.

In “Slow Day,” Spurlin is accompanied by Kalyn Willson to create a piece of timeless music. Their unique voices together add the perfect blend of harmonies and sounds to the single.

“Sail Beyond The Sea” is catchy from start to finish with a gentle mix of fast tempos. “No it won’t be easy/ but I’ll sail beyond the sea” he sings as he promises he can get there within a day to see his lover.

The final track, “(Noise)” finalizes a ten track album that puts us in check with our emotions. The background harmonies, vocals and lyrics brings together a simplistic track culminates a high sense of being alone and being okay with that.

Spurlin brings on a range of emotions mixed with a sense of knowing who he is and has become. Enjoy listening to Spurlin right here on Music Trails!