The Junos, an up‐and‐coming American rock trio, are preparing for the imminent release of their debut album. After being silent for nearly three months following the release of their third single “Ride the New Vibration,” they return full of surprises, performing live for their first and second time on consecutive nights, and hinting at new recorded works.

On Saturday October 24, the band flooded their Facebook and Instagram feeds with seemingly cohesive art pieces, apparently labeled one to nine, with no further captions. For those interested enough to check out their profile, a full art piece was revealed as a mosaic (see below). 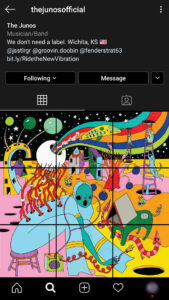 It soon became obvious to everyone who saw the posts that this was the cover for their upcoming album. Some speculated that the idea of splitting it into nine pieces was a hint that the album consists of nine tracks.

After more recent posts from the band, some details were confirmed. The album titled The Cosmic Skybus features nine tracks and will be available to stream on November 13, 2020. Coincidentally or not, that is Friday the 13th. The band has confirmed from other sources that the album will include their latest singles, “Cherry Garcia” and “Ride the New Vibration.”

The band still maintain their independent status as they haven’t worked with a label yet. The album was recorded entirely in singer/guitarist Jesse Gray’s basement studio and produced by himself. As far as what it sounds like, we have no idea what to expect beyond the two singles already released. Apparently they are already including a few of the other songs from the album in their live setlist, so it may be worth it to attend one of their shows and get a sneak peek. In the meantime, we have no choice but to look forward to next month’s Friday the 13th.