The single takes listeners through a train ride full of mystery, adventure, and regret. He makes sure to include viewers through every scene as the music video shifts from the two people sitting next to each other to the streets of Hong Kong.

“It’s a song about being able to talk to someone about anything and everything under the sun, but being unable to express your true feelings,” William Elvin mentions. “It is also my loving tribute to Hong Kong Island – a city that has been kind to me since I was a little kid.”

Elvin uses “Tram (Quarry Bay to North Point)” to share his love for his fascinating multi-cultural city of Hong Kong Island. The music video embraces the song’s narrator, who finds it hard to share his hidden emotions, living in his own thoughts while rising the tram, the cheapest and slowest mode of transportation in the city.

The gentle, sympathetic strums of the guitar fit the narrative perfectly.

As he maintains a quiet demeanor, he begins singing a medley of emotions in his head of the things he wants to say to the woman sitting next to him on the tram. He wishes he could speak to her without making a fool of himself, yet he keeps every poetic word he wants to share hidden away.

It’s a moment many of us have felt at some point in our commute toward work, home, or school in public transportation. Seeing someone we wish we could speak with but avoiding any sort of contact to avoid being too forward. Elvin elegantly puts into words how these emotions feel like without fully mentioning it. 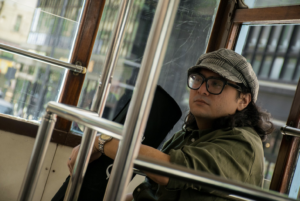 Maita Ponce leads with her awe-inspiring vocals to deliver a harmonious melody between both artists. Together, they form a flow with lyrics like, “Now I think of situations/ of beginnings, middles, ends/ How these emotions came about/ They don’t even make much sense.”

As a detailed songwriter, William Elvin draws us in with his words and sounds from the very start. Lyrics like “From Quarry Bay to North Point/ Maybe we can ride the tram/ And we could talk of pop and rock/ And Hong Kong traffic jams” flow naturally with the visuals we would imagine on our own without any visuals.

Instrumentally focused on the guitar, this single hits all the emotions at the same time. Take a second to listen to each note and lyric come alive as every aspect of the song unite to give us a thoughtful and enjoyable track about riding the tram.

Make sure to check out “Tram (Quarry Bay to North Point)” for his outstanding sense of storytelling that you’ll want to share with your friends and family. Keep up with William Elvin as he entices us with his future releases!